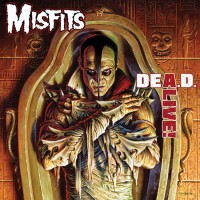 By this point, you have to give Jerry Only credit. When he first resurrected the Misfits name in 1995, he was accused of doing so only to capitalize on the band's legacy. But since then, the "new Misfits" have released numerous albums, played hundreds of shows and have even appeared in a few movies. In fact, even the group's live show has featured an increased amount of newer Misfits material in recent years at the cost of the classic compositions. Certainly, Glenn Danzig was the most essential member of the original Misfits, but Only's muscleman style bass was pretty essential, too. It would seem that Only is doing everything he can to support his art though his own creations in lieu of relying on the band's more well-known, classic material written by Danzig. Whether Only's motivation is pure or more a result of wanting to keep a larger share of royalties at this point is irrelevant. No matter how you cut it, Dea.D.Alive!, the third Misfits live album, features the band striving to stand apart from their classic material and on their own feet.

In fact, Dea.D.Alive! is so dedicated to the new Misfits that it has no pre-1995 material on it whatsoever. Really, it functions as a live showcase for their last studio album, The Devil's Rain. The first seven tracks draw from that release exclusively. Unfortunately, similarly to the studio counter parts, the live Devil's Rain tunes are sunk by mid-tempo presentation. Where the new Misfits used to tear through the older songs at double time when Marky Ramone or Robo was behind the kit, Eric Arce keeps the band clomping along at a steady, but much less frantic pace. Where a berserk speed could have elevated the new songs by making them more ragged and wild, the steady tempo gives the songs no real life beyond their studio recordings.

Over the past ten years, Misfits shows have gotten increasingly loud. While that might seem cool, sometime around 2008 the band reached a sonic breaking point. Now whenever the Misfits play live, the sound is so loud that it seems the amps simply can't take it and all one hears is white noise instead of instruments or vocals. Dea.D.Alive! pulls back on the volume somewhat, but the whole recording is mucked up with a thick cake of white sound that unfortunately muddies the drums and even worse, buries the sharp guitar lines of Dez Cadena. However, Only's vocals, which admittedly are the best that they've ever been, seem much clearer than the rest of the mix.

Despite its sonic shortcomings, the second half of the disc saves the album. The band tear through Michael Graves-era songs with Only on vocals at double time, similar to the Only/Cadena/Ramone lineup, and the songs rip. Perhaps because the songs have been in rotation longer, the band sound tighter, faster and really emphasizes the underlying craftsmanship of the songs while remaining fairly vicious. In fact, because the Graves songs are played with such ferocity, they actually trump the takes on the first new Misfits live album, Evilive II.

It seems Only has taken measures to make the Misfits more family-friendly. Danzig would sing about rape, skull-fucking and bathroom suicides, using horror movies and imagery as backdrops to present more gruesome concepts, thereby creating an interesting contrast between actual, wretched events and guys in rubber alien suits trying to be scary. Only is more content to write straight re-tellings of famous b-horror movies, which makes it interesting for the band to cover Rocky Horror Picture Show's "Science Fiction- Double Feature. For a guy making the Misfits "nicer", it sure is funny that he picks a sing about cross-dressing, murder, enslavement and rape as their cover tune. Conceptual strategy aside, the song, with its doo wop base, works wonderfully within the confines of the modern band. Really, it's one of the most clever choices for a cover they could have picked.

When the Misfits toured in 2003, they had Marky Ramone behind the kit and played about 40 songs a night covering new Misfits, old Misfits, Black Flag, Ramones and Project 1950. That show was awesome because it underscored the legendary talent of the musicians involved as well as the importance of the songs that they helped write. A live album of that tour would have been an fitting summation of the band. Dea.D.Alive! tries to make the argument for the newest incarnation of the band independent of its previous works instead. While the newest band is good, it doesn't hold up to the the Only/Cadena/Ramone era when comparing new Misfits to new-new Misfits. It could be considered cruel to continually stack the band against its landmark earlier incarnations (and I don't just mean the original run), but when the band play up its legacy and foundational imagery so much, it's impossible to not do just that. Misfits maniacs will enjoy this, but everyone else knows where to go first.

-For the life of me, I can not parse the title Dea.D,Alive. Why is it written like that? Punknews publisher Aubin Paul suggests that it is a reference to Earth A.D., but this album features no songs or imagery from that studio recording. Aubin may very well be right, but the reference makes no sense to me.

-A few people and publications have suggested that this recording does not feature any old-Misfits songs because Only couldn't get permission from Danzig. This is incorrect. In the USA, and most other countries, one does not need any permission to cover someone else's song compositions, so long as one pays the statutorily mandated royalty fee.