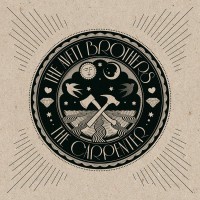 The Carpenter, the Avett Brothers' second album for a major label and first for Universal Republic, feels a lot more like a major label release than its predecessor, 2009's I and Love and You. The record has a huge pop-rock sheen to it that will take fans of the group's older, more authentically country material some time to adjust to. Once making peace with the more accessible sound, however, it becomes clear that the Avett Brothers' songwriting chops are just as sharp as ever.

Lead single "Live and Die" is an absolute earworm that probably had a lot to do with The Carpenter debuting at number four on the Billboard charts. The track is a perfect example of the Avett's new direction: the prominence of a banjo gives a nod to the group's past, but the booming drums and layered vocals present in the chorus are much more pop-minded than anything in their back catalog. Opener "The Once and Future Carpenter" follows a similar path, starting out as an oddly soothing acoustic number before the full band kick in and Rick Rubin's production really shines. There's an energy to these songs, best summed up with a line from the latter, "If I live the life I'm given, I won't be scared to die."

That energy fuels the best parts of The Carpenter. When the group slow down their attack, things can go anywhere from uninteresting ("Through My Prayers") to embarrassingly cheesy ("Winter in My Heart"). More upbeat tracks, such as the impossibly catchy "I Never Knew You" are what work best here.

There's a few stylistic detours on The Carpenter that are guaranteed to raise some eyebrows. The most accurate word to describe "Paul Newman vs The Demons" is "grunge." The group's members played in rock bands in their youth and have noted the influence of Soundgarden, so it's not a complete surprise, but it still feels slightly out of place in the context of the record, as great of a track as it may be. A grungey side project from these boys would most likely be excellent. Elsewhere, the piano-driven "Geraldine," with its rapid-fire spoken word delivery feels like it came straight from E-Street.

The Carpenter is a pop-rock album, plain and simple. The country/bluegrass influences are still present, but they're forced into the background, and depending on what you liked or didn't about the Avett Brothers in the past will color the way you feel about their new direction. Taken on its own however, The Carpenter is a fine album that deserves credit for its willingness to take risks, even if not all of them pay off. It's not their best album, but it's a worthy listen.