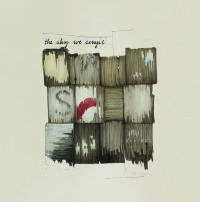 The Sky We Scrape

Jumping into a record with not-too-high expectations and then proceeding to get blown away by the quality is always a great experience. That unexpected blow to the gut is what makes music so appreciable and mystical. It's an art in its finest form and the Sky We Scrape have done brilliantly in painting this masterpiece called Divides.

The Chicago quartet build this record with three-minute deliveries that are best dubbed as hybrids of hardcore and heavy punk. The raw emotion and grit is brought across nicely under the vocals of Jason Thompson. He's clean and crisp in lending a powerful sound on the mic, and his guitars shred nicely accompanied by those of Ryan Steele. The opening portion of the record is well-fueled by "Sing Your Way Home" and "Nocturnal Americans," which sling smoothly into "Continental Divide." The latter ramps the record up to highlight how well they intersperse melodic punk with concrete sound structures and instrumentation. The inventive guitars and introspective songwriting add a flair that's punctuated by Justin Santora's perfectly-timed drumming.

There's a touch of Casually Dressed and Deep in Conversation that Funeral for a Friend fans may recognize here, but the elements are nicely drawn out with a hard-edged punk focus. The musical craftsmanship is on par and if you're questioning this, the technical power of the guys stand out even more when bassist Aaron Boynton adds his two cents. "Invisible Hands" and "The Shortest Distance" are struck with all the right chords and adds a distinct flavour to an already impressive series of tracks. The somber tone in the latter, the passion amid the melancholy, the dismay and the honesty of the lyrics all speak loudly.

"Southern Hospitality" helps wind the album down in culminating to a resounding success, although there's a disjointed feel from "Rising Tides" which still doesn't manage to hamper the ebb and flow of the music. It's a bit off but when "How We Begin" closes out the record, you're too busy taking notes on how amazing the bulk of the album is to bother nitpicking the one or two iffy tracks.

The Garden: Everything Is Perfect [cassette]