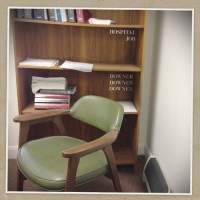 Springfield, Ill.'s Hospital Job includes members of the Copyrights, the Nephrons and Horrible Things, which add to the hype of Downer, Downer, Downer a lot. Needless to say, with the eyes focused firmly on how these sounds would influence the collective effort of Hospital Job, there's a sense of contentment with the record delivered. I personally had a bit more expectation from it but while it fell just short of my personal bar, it still works well enough.

There's a firm Blink-182-ish sound throughout the record, but it's the old-school variety and dare I say, the better elements they've utilized. They also draw from the best segments of the aforementioned three bands above and cement the record in a fitting punk sound that's engrained with a melodic-pop bent as well. This is exemplified in tracks like "Bathroom Stall," "What I Don't Like About You" and "The Trap." They're neatly aligned with the ideals cultivated by the band with clean-cut guitar work and a typical punk strumming you'd expect from bands like this.

"Free Onions" and "Off The Map" extend themselves as catchy and fist-in-the-air punk anthems that should have a more lasting effect on the listener, but somehow they just fall slightly short. Again, I reiterate that I've some ridiculously high expectations for the record so I need to note that these are still pretty decent tracks. They missed that grand effect I wanted, which I did get from the closers such as "Current Event" and "Get Lost" which struck home in their simplicity but more so in their effectiveness.


Downer, Downer, Downer is lighthearted and that cliched "fun" album that's worth a couple spins. It sinks in quickly but how long it reverberates, well, that's another issue. Not the best of albums but by far, it's much better than what a lot of punk bands put out. It's concise punk and quirky in its own essence.

The Sky We Scrape: Divides