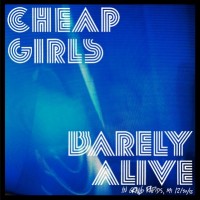 "Hey, we're Cheap Girls from Lansing, Michigan. It's a pleasure to be in Grand Rapids, Michigan. Thank you very much."

Other than a quick dedication of show-closer "Parking Lot" to their parents, that's all the stage banter Cheap Girls give you on Barely Alive, a live recording of the group's last show of 2012, as well as the first release on the band's own Business Casual Records, and impressively, their second release of 2013 less than two months in. The Michigan power trio's studio albums have never carried any unnecessary bells and whistles, and they take a similarly no-nonsense approach to their live performances.

Things kick off with "Gone All Summer," the fiery opener from last year's excellent Giant Orange. Newcomers to the group's material may recognize the song as Kyle Kinane's intro music on his recent Whiskey Icarus special. Barely Alive features a great cross-section of all Cheap Girls' material so far, containing three songs from Giant Orange, two from My Roaring 20s, two from Find Me a Drink Home, as well as "Pure Hate" from their split with Lemuria. The set list also does a good job balancing some of the group's more well-known songs ("Ruby," "Hey Hey I'm Worn Out") and deeper cuts that might not seem the most obvious choices for an eight-song set ("No One to Blame", "Modern Faces").

Ian Graham's vocals sound more or less exactly the same as he does on the group's studio recordings, and the band perform mostly faithful, perhaps slightly speedier versions of the songs fans have come to know and love. The biggest differences between the songs as they are presented on Barely Alive and their studio counterparts, is that stripped of the multi-tracked guitars present on the studio recordings, with only Graham's bass and brother Ben Graham's drums backing him up, Adam Aymor's guitar solos stick out more clearly, and become striking compositions of their own.

At eight songs and with a running time of less than half an hour, Barely Alive, much like Off With Their Heads' Hospitals before it will surely spark some debate - Is it an LP? An EP? Something in between? The correct answer is, "Who cares? It's Cheap Girls, and it's six dollars. Buy it."