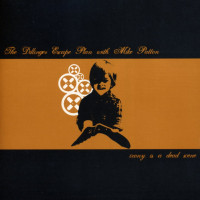 This release really got me thinking. When federal agents kept tabs on bands in the early-to-mid 80s in Los Angeles, they regarded punk/hardcore and so forth as a threat to society. I'm pretty sure that some of those in law enforcement at the time ended up actually listening to the bands they were chasing after: BLACK FLAG, BAD RELIGION, AGRESSION, etc. I wonder what would happen if such activity still existed today (and not on the local level that usually deals with venue fire codes), and a band like DILLINGER ESCAPE PLAN was on the federal radar. My guess is that the feds would probably think all of us into hardcore, metal, or whatever the hell this is called have severe mental issues. "Irony is a Dead Scene" is like packaging up the insane rantings of a bi-polar disorder sufferer and selling off those "extreme" moments. Most noticeably with this release is not so much how technical DEP sound, but how fucking loud it is and how my ears hurt just trying to take it in. If one wants to actually appreciate the underpinnings of this band, a pair of headphones is required, as only then will one get a proper feeling of how sick this music is, and just what kind of wizardry the band is pulling off.

Mike Patton, as the featured vocalist on here lives up to his reputation - eerie, brutal, almost inhuman, and devilishly trippy, one has no idea what kind of vocal contortion he's going to pull off next. As for the rhythm section - it's nothing short of mesmirizing, intoxicating, and full of burn. I think there's a stronger use of electronic touches with this release, but don't worry, DEP haven't gone the progressive space-rock route. The third track, "When Good Dogs Do Bad Things" is a bit slower than the other three, but it grips the listener so tight, a clavicle seems bound to break. Although this four song EP (18 minutes) is only a teaser to what this band can pull off in the future, it's one taunting well worth experiencing.