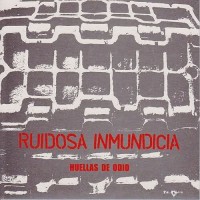 Okay, so this is a few years old and you might be wondering why only now it is getting coverage here. Well, the fact that this release is three years old doesn't really matter, as all you need to know is that Ruidosa Inmundicia (using the internet this can loosely be translated to either "noisy dirt" or "startling corruption," but in reality could be something else) knock down numerous doors, stomp around and create one hell of an almighty racket all in the name of hardcore.

This release features eight tracks of blistering hardcore punk rock, delivered by an Viennese (Austria)-based band fronted by a Chilean female singing in Spanish. It's far too easy to go down the route of using hyperbole when getting worked up/excited by records/bands etc. but to my mind here's one record that really deserves more than just a passing comment in terms of its musical output and that's based purely on the impact it's had on me.

The songs really go by at a breakneck speed, with little care for anything other than creating an intense sound fronted by a vocalist who has the perfect delivery for something this fast, this furious and this pissed off. There's no filler in these songs, as they basically rage from start to finish with only slight variations in pace. Lyrics are spat out with venom and despite not being a Spanish speaker I'd take a stab at them being full of anger and frustration. Does it seem as if I like this record? Yes? Then you're getting the picture, because this is one of those gems that come along all too infrequently these days; something that makes a big impression and stands out as an excellent record, one which certainly hits the spot for me. From the moment that the needle drops and "Callar Por Nada" ("Silenced by Anything?") begins, this records gets me all hyped up and even after many spins it's not lost that ability: surely one of the signs that it might be a classic? For me, the answer is unequivocally yes.

It's not just this record that proves that Ruidosa Inmundicia are a particularly special band, as their whole recorded output is noteworthy, but for now the focus on this single. The one thing I'd add is that the production has much more of a raw edge to it in comparison to the songs on their split with German band Solid Decline and slightly more so than on the De Una Vez 7-inch. The only downside is the few seconds it takes to flip between A and B sides (something that when the single is ripped to an MP3 player, is not a problem for listening "on the go!") because I'm impatient to keep hearing the songs over and over.

Texas is the Reason: Do You Know Who You Are? - The Complete Collection