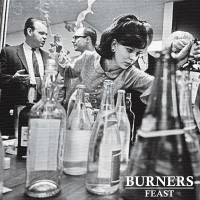 Burners have been tearing it up on the Atlanta circuit lately and the trio finally brought Feast to light after garnering some attention with their fervor and aggression on their local routes. They've neatly shaped an EP that's blended fast-paced punk and skramz quite efficiently with heavy bouts of screamo stuck in, a combination that works well.

"Feast" brings out the best of their skramz vibe, across which Nathan Streeper's voice hurls. It's his shrill vocals and incoherence that somehow manage to make their distorted sound appeal to the listener. Streeper's guitars also stand out, and he's vocally backed by bassist Zachary Hobbs who lends to the screamo effect as well. "The Act of Seeing with One's Own" brings out a slight Dillinger Escape Plan tone that drummer Alan Hamilton exposes with his berserk wailing on the kit. He comes off as highly energetic and never misses a beat.

The slick guitars niftily accentuate what Propagandhi fans may flock to in Burners. "Problem Solved" and "Blackened" extend on their screamo sound and it's resolute how nicely it comes off. It's not as cohesive at times but by the time "Battery" comes around, you appreciate the record for what it's accomplished. 'You set me up to watch me fall' is yelled repeatedly in remonstrating manner and it hits home - Burners wanted to display their knack for placing their musical talents into a kerosene barrel and igniting it. Fast, furious and worth the listen. Feast isn't as polished as it could have been, but it's really impressive.