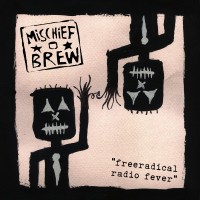 Although Mischief Brew have been getting harder and more electric with each release since their debut (more or less), Free Radical Radio Fever finds the band reaching down to their roots and digging even deeper than that. While Mischief Brew started out as a folk-punk band, or a band with both folk and punk leanings, Free Radical finds the band manifesting as a pure folk band, more or less.

"Free Radical Radio Fever" is an extended folk stomp with just Brew leader Erik Petersen and an acoustic guitar rallying against the increasingly conservative radio. In a rising and falling beat similar to political folk pioneer Utah Philips, Petersen attacks terrestrial radio and, much in the fashion of the pre-war strummers, names names, calling out Sean Hannity in particularity.

"Carried Away" is a slow, smoky number with more of a southern blues feel than the Dust Bowl feeling of the flip side. In contrast to the direct nature of the a-side, "Carried Away" finds Petersen contemplating life itself and recounting how life drags a person from one stage to a next, sometimes ending in unexpected or unwanted peril. What's particularly fascinating is that Petersen has previously stated that he's an atheist, yet so many of his songs rely on Biblical, or at least classical imagery, creating an interesting contrast as well as an opaque, amorphous question mark that seems to drift through all of Petersen's compositions.

The download-only bonus track "The Ballad of the Cloth" is a ballad in the truest sense. Petersen sings in a liquid slur over dreamy picking, asking the divine for social equality. Showing his masterful craft of lyrics and song construction, Petersen snaps that "They give you salvation or damnation / but I'll take neither" just as nineteenth-century continental picking jumps up behind his positing. He then urges the peasantry to storm a nearby castle in order to redistribute wealth. By referencing the class warfare of centuries past, Petersen shows one of two things: 1) that the poor man is fated to perpetually struggle against the vice of the few or 2) that contemporary themes merge so well with those of the years of fiefdom because we are entering a new dark age. One interpretation suggests a relentless positivity in the strife of the sufferer, while the other suggests a much more depressing fate.