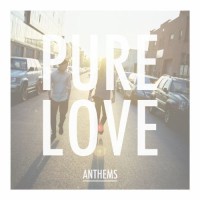 Supergroups are tricky. If a group of previously established musicians come together and play music not too far removed from their original bands, fans will inevitably ask "What's the point?" On the other hand, if such a band forms and opts to try something new, they risk alienating that very same fanbase. Pure Love, consisting of former Gallows shouter Frank Carter and ex-Hope Conspiracy/Suicide File guitarist Jim Carroll, have gone with the latter approach, and as such, fans of the duo's previous bands hoping for a blistering hardcore punk assault will surely be disappointed. Removed from those expectations however, Pure Love's debut Anthems is a gem of pop-rock album with arena-ready hooks that will stick with the listener for days on end.

Anthems begins with the "Don't Fear the Reaper"-esque guitar intro of "She (Makes the Devil Run Through Me)" and establishes right away that Pure Love are a very different animal from the members' past projects. Gallows fans in particular will be shocked to hear Carter actually singing, and singing quite well for that matter. Up next comes one of the album's highlights, "Bury My Bones," a Cheap Trick-indebted power-pop banger that finds Carter sounding startlingly like the Menzingers' Tom May. The production really shines on this track, with one of the cleanest sounding guitar tones captured in recent memory. The guitar solo sounds like it could have come from the first Boston album, and if that doesn't sound like a compliment, I assure you it is.

One aspect of Pure Love's sound that listeners might be a little uncomfortable with is their occasionally sexually explicit lyrics. "Burning Love" in particular is quite graphic, and to put it lightlyâ¦ rough. "Handsome Devil's Club," much faster here than in the Daytrotter session that introduced the song to the world, for its part chugs along like an X-rated Green Day.

Musically, lyrically, and vocally, there's a confidence in these songs not often found in debut albums. Sure, the members are veteran musicians, but they're in such uncharted territory here that that seems irrelevant. "Scared to Death" is probably the closest Pure Love comes to reminding listeners of their pedigree, and even that is considerably softer than anything on Grey Britain. Pure Love's Anthems is tailor-made for rock radio, but it happens to be better than most of the things currently on it. Fans of melodic rock music with a tinge of punk attitude will find plenty to sing along to here.