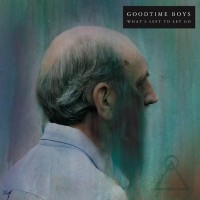 Hailing from the United Kingdom, Goodtime Boys are one of Bridge Nine Records' newest signees. Signing to a hardcore label such as B9 carries with it an expectation that Goodtime Boys immediately buck. The band share more in common with La Dispute and Pianos Become the Teeth than other B9 bands like Foundation or Expire.

What's Left to Let Go starts off with "Bloom," which has a chilling relaxed guitar intro. However when the full band come in, it kicks it up a notch with a melodic but upbeat rhythm. Then vocalist Alex Pennie comes in with his powerful vocals and really brings in the full sound of the band. I immediately noticed the accent on the vocalist, but it's a good thing as it makes the band sound different than most bands of this hard-to-name genre that has been gaining a lot of ground in the hardcore community. His lyrics are immediately at the forefront of everything, as well they should be, being powerful and emotional. The rest of the song keeps up this swing of going from relaxed to very powerful and back again like a lot of the songs on this record. However, it doesn't get monotonous or boring as the band have a good enough writing ability to keep the music interesting.

In the middle of the record the song "Rest" cools things off a bit coming in with a simple drum beat and an almost haunting guitar melody that fit the lyrics and vocal delivery perfectly. And that's the great simplicity of What's Left to Let Go; Goodtime Boys aren't afraid to use a pattern and vocal style that has been established, but do their own thing with it to try and keep it interesting. This album is technically a double EP and not a singular LP as the first five songs were previously released on the Are We Now, Or Have We Ever Been EP. However, if I had not known this I would not have figured it out from listening to the record as the songs flow so fluidly it sounds like one album. This is partially due to the band's cohesive writing and also partially due to those songs and the new songs being mixed by Defeater guitarist and Getaway Recordings engineer Jay Maas.

As a whole, this record is a solid record that keeps things interesting, however it is hard to say if it stands out in a field of bands like TouchÃ© AmorÃ©, Defeater and Pianos Become the Teeth that have released amazing records over the past few years. I do think if Goodtime Boys stay on this path of bucking trends in a genre getting more and more crowded, I'll be looking forward to their next release and seeing them live when they get around to touring the United States.