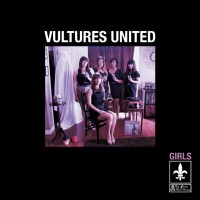 A well orchestrated cover can define a band, sometimes even beyond their original compositions. By using well-known (or completely unknown) source material as a constant, a band can change a song to their own devices in order to show the listener just what they can do, from where they draw their inspiration, and also their skills at shaping words and sounds to their own whims. But then, there's the covers album. While one or two covers can be tactical tools of self-description, a full album's worth often serves as a bucket of complete non-description, or worse, a placeholder until the band record more original stuff. That's why Vultures United's covers record Girls is so surprising.

Built around a collection of songs which in their best known versions were recorded by women, Girls finds the band suggesting something with regard to women in music, but leave the answer up to the listener. The songs range in basically brand new, from the Tings Tings' "That's Not my Name" and Best Coast's "Summer Mood," to the classic era of punk with X-Ray Spex's "Oh Bondage, Up Yours!" to the earliest days of experimental music, with a cover of Nico's "Nico" and "These Days." In selecting the tunes, the band show that throughout the era of pop music, women have been able to penetrate the notoriously male crowded rock music scene and have created music that frankly, could have only been created by women.

Although the cassette-only "These Days" was written by a man (Jackson Browne) Vultures, who are also males, are able to pull the unique feminine perspective from the song's contemplative, distanced take on interpersonal relations and translate it into a male voice for the first time The cross-gender contrast is particularly interesting. Are these young men seeing these songs through the eyes of a woman, or are they expressing something most men keep shrouded to guard their own masculinity? And then there's the cover of "Oh Bondage." No one can beat Poly Styrine's take, but still, Vultures United's version rips.

Most of the songs are broken down into their component parts and performed in varying degrees of the classic hardcore style in which Vultures United deal. "That's Not My Name" becomes basically a late '70s west coast hardcore anthem. Bjork's "Army of Me" wavers somewhere between throbbing post-punk and Refused-style catch and release.

But what takes the album above most other covers albums is that between most of the songs are ephemeral, dreamy original instrumentals named after various women. Choral-like female vocals, synthesizers and organs drift through like mist until the band ratchets up the stakes and snaps into their covers. The interludes not only link the songs together, but show that Vultures United are evolving from a hardcore punk band, to a hardcore punk band with real style. Girls is about as good as a covers album can be, and if the band are able to retain these new found tricks and techniques in an album of original material, then Ceremony and Fucked Up might have to make room on the throne.

[The cassette version of this release comes with a download and includes two bonus tracks, the aforementioned Nico songs.]