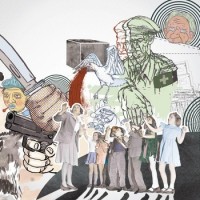 Big Dick. Yes, this Ottawa-based band are named after the Nomeansno song of the same title. Yes, Big Dick can be as uncompromising as their fellow Canadians, albeit with one less member than the illustrious long standing trio. In fact, it's not so much a case of being deliberately difficult to listen to (I'll hold my hands up and say that at first I couldn't get into this album), it's more a case of there being such a plethora of influences and sounds which have been thrown into a mixer and tipped out, regardless of what that end result might be. However, I eventually realised that this is actually a long way from reality once I'd returned to the record a few more times. Oh, and yes, if you search for "big dick" or even "big dick ottawa" on the internet, you get some interesting results.

The influences/comparisons that I hear when listening to Big Dick could be listed as including the following bands:

Muhammadali â for the sheer "What the hell?" experience that I encountered listening to this album, both first time round and on subsequent plays.

Libyan Hit Squad â for having the ability to take a number of genres and bring them together into something that on the face (or ear) of it might not be coherent or cohesive but actually works really well.

Big Boys â Big Dick contain an enthusiasm and energy that this great Texan outfit managed to convey within their output.

Japandroids â a bit obvious to consider another Canadian two piece? Hell yes, but there are undoubtedly some similarities to be heard.

Low Culture â not so obvious, but as specific moments there are some pure melodic garage punk nuggets that remind me of this Los Cruces quartet, as well as the likes of Sundowner (the Dirt Cult Records artist, not Chris from the Lawrence Arms) too.

Metz/Big Black â due to the less than conventional musical approach taken.

Attack! Vipers! â more so for the thunderous approach the Canadians sometimes manage to create, much like their English counterparts.

Added to the above would be some touches of new wave and UK post-punk tossed in for good measure but on the whole, it would be safe to say that this is an off-the-wall punk rock record.

For songs to hone in on I'd recommend "Medic," a choppy convulsive gem, "Schoolyard Violence" with its catchy refrain and "Witchcraft" with its repetitive beat and brooding quality. It's not all craziness though, as the relaxing "Antisocial" proves with a much softer approach that allow the duo to display a different side to their work.

What is most surprising here is that Big Dick is actually a duo. These songs lack the space that some duos operate in and whether that is purely from making good use of a studio or that this is something that they might struggle to replicate in a live setting I don't know, but Big Dick ram their songs full of content to make them of the kitchen sink variety. Whatever it is, this record is one hell of a piece of work with an ability to challenge the listener but equally to welcome him/her in with open arms. Get yourself ready for the Big Dick cacophony.