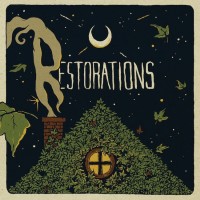 A few 7-inches and splits, one EP and one LP into things, and it's still difficult to pin down Restorations. "Grown-up punk" seems to be the unfortunate winning descriptor, but it's so hilariously vague and slapdash it does the band and their worldview a disservice. What does it even mean, anyway? It's punk for old people? Well, so are Pennywise; do Pennywise and Restorations sound alike or have the same sonic intentions?

Anyway, none of that matters now. Restorations' new single "D" takes the foundation the band laid on their excellent debut LP and places a slightly more direct, upbeat veneer over their extraordinarily weathered sound, but in that direction lie a bunch of new and exciting musical angles. As both a single and an opener to the band's upcoming full-length LP2, it's awfully effective in painting a brief picture of the group's evolution as songwriters and players.

The song starts with a cacophonous crash before dovetailing into a sort of droned, atmospheric but tension-filled harmonic guitar line; it stays in the lead as the entire band kick in, fleshing out a massive intro eventually co-anchored by thunderously fast drumming and a brief, but tasty guitar solo. Jon Loudon's vocals, while still as gruff as they've ever been, sound more assured and confident on this track as he keeps up with, and aids, the song's energy with ease.