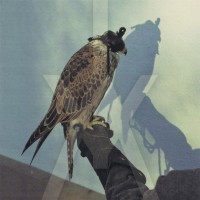 Iceage's You're Nothing is the kind of nihilistic, mid-winter record anyone even mildly into punk needs to hear at some point during the year. These Danish noise rockers sound bigger, noisier and more complex on You're Nothing in comparison to their 2011 debut. While that record earned them some attention as post-punk revivalists of sorts, it was evidence of a style still in development. The band paid lots of homage to noise rock and even metal while keeping things rooted in the quick-paced power chord department and that produced a few great tracks, but pales overall as a record next to the more creative You're Nothing.

It seems Iceage's songwriting chops have improved over the past couple years. These songs feel like disparate ideas almost stitched together, changing tempos and time signatures without warning on songs like "Burning Hand." This apparent surplus of stellar riffs produces slightly longer songs that feel linear and multi-faceted. They played with this sort of writing on New Brigade, but with less assertiveness and attention to detail. In addition, You're Nothing comes off as more energetic, especially on the first side of the record where we have the whirring lament of "Coalition" and "In Haze," the drumming is frantic and the riffs are speedy. This is juxtaposed with the eponymous interlude and militaristic march of "Morals," which closes out the first half of the record with a building insistance–"Where's your morals?!"–turning the question over and over again before falling back into a snare-driven trudge.

Elias RÃ¸nnenfelt's vocals are noticeably more confident on this record, too. He's mixed higher and tries to cram a lot more lyrics into songs like "Coalition." Those lyrics ain't bad, either. RÃ¸nnenfelt slurs some pretty good lines for a guy who's not a native English speaker and though his youthful snarl is a cornerstone of the record, it's only once in a while that phrases like "These days so numb and faded" or "Nature's violence!" manage to break through the fray. You can feel the ennui in his delivery, though. The only song sung in his native tongue, "RodfÃ¦stet" is a classic punk rock banger that stakes out its place as such without a single discernible line. A couple of the tracks on the second half do seem a little underwhelming compared to the strong opening side, though. "Wounded Hearts" and "It Might Hit First" sound more like something from New Brigade, which is okay but after the band's more ambitious side has made an appearance, these songs feel a little flat.

Fortunately, the record ends on the stronger "Awake" and excellent title track. Chords extended beyond the basic "power" formula help the band sound more enveloping without sacrificing too much melody. For all the catchy moments here, You're Nothing is hardly what you'd call accessible. The bass guitar is steeped in grimy fuzz that gives a thick quality to the record's low end while the guitars play off each other much more intricately than they did on New Brigade, slipping in and out of dissonance and harmony in a way that can be disorienting, especially given the pace. The effect can be confusing and disorienting, giving this music some real potency. We're often left to find our own way through the layers of guitar and distortion, forced to find our own grounding in the chaos. For all that could perhaps be said about this as a representation of information-saturated, A.D.D., post-capitalist culture I really think this album tackles its object at a micro level. "Coalition" and "Morals" are directed to a person, not people. It's not a grandiose statement about the world and humanity and you. You're nothing, dude. Remember?