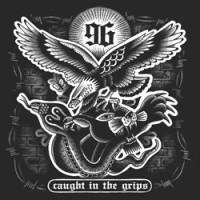 It's great to see a band tagged with the hardcore punk label live up to it, and 96 justify their tag fully with Caught In The Grips. It feels like you're actually caught in the crossfire of their energy and vibrance on a ride laced with racy hooks and simply beastly guitar work. Their infectious riffs and hard-hitting stance is more than enough to leave you wondering how a band with such a small name, no pun intended, could pack a record with this much venom in just under 20 minutes.

"Had Enough" allows the gents a small spot for you to sample just what they want to lay out with the opener and it showed why this Essex County ensemble deserves such a following. They take hardcore and expound on the term brilliantly. After cutting teeth on the opening track, the adrenaline harnessed on "Fast Money" and "Hard Luck" barely leaves time for you to catch your breath. The fervent pace, flashy solos and flair show why Marc Gurducci and Pat DeFrancisci knew what they were doing when they decided to throw their metal influences in the guitar mix.

I scraped up some of their older songs and it was clear they needed that little nudge to catapult them into the spotlight and this album proves to be just that. Cory Donahue's vocal style and hardcore delivery is tops. It's legible and matches so well with the instrumentation. Steve Cieri's drums are that pounding exclamation mark on why you need to take note. It punctuates the essence of hardcore perfectly when you roll around to the quickfire shots of "Stray Dogs" and "Dried Up," there's a subtle finesse of Slipknot and Biohazard influence embedded.

Building to the end, there's great focus on "Sixteen Inches" that sums up what the quintet's about. The ferocity and solid flow to their music are distributed evenly throughout the record, from the shortest tracks to the slightly lengthier ones. If you're looking to get engrossed into a System of a Down-esque vibe, "Iced Tea" offers you that meandering road to follow...and I don't mean that in a bad way. This record's one-part action, one-part fury and one-part 'ready to rip your throat out.' Definitely one you don't wanna miss.