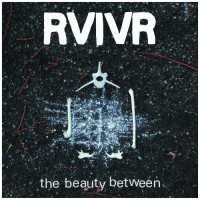 It's been nearly three years since RVIVR dropped their self-titled debut full-length, a record which never gave this writer the experience anything more than semi-pleasant background music, but in those three years the Olympia, WA-based group have stepped their game up on almost all fronts, and created one of the most arresting punk rock albums in recent memory in The Beauty Between. It's a very pleasant and welcome surprise that any fan of the genre would do well to seek out immediately.

Much like "Rain Down" opened RVIVR's self-titled 2010 album, "The Seam" begins with a lengthy tension-building instrumental intro before launching into an all-out punk assault. It might actually veer a little too close to that song, structurally speaking, but once the song truly kicks in, the listener is treated to some of the finest punk rock whoas since Japandroids' "The House that Heaven Built" and all is forgiven.

RVIVR won their devoted fanbase playing a speedy brand of pop-punk, and The Beauty Between has plenty of that to go around. Barnburners like "LMD," "Spider Song" and "Wrong Way/One Way" deliver the sound that fans have come to love, but with a sharper sense of dynamics and the matured songwriting ability that comes from spending years playing together on the road. Any one of these songs trumps anything in their back catalog. However, the group have much bigger things on their mind with The Beauty Between, and several songs display an ambitious streak barely even hinted at on past releases.

"The Hunger Suite" is a three-part, nearly ten-minute opus that transforms itself from a mid-tempo classic rock-influenced number, to an ambient noise piece, to a hyper-aggressive punk rock thrasher and back again. There are saxophones, shred-tastic guitar solos (these ladies and gentlemen really know how to play their instruments) and all manner of things many bands of this breed wouldn't dare to touch. Quite frankly it's pretty weird, but it's a risky experiment that pays off splendidly, and poses a nice contrast to the more traditional punk rock songs on The Beauty Between. That weirdness does find its way into other songs as well however, most noticeably in the saxophone solo in "Big Lie."

Guitarist/vocalist Erica Freas is the clear star of the show on The Beauty Between. Three of the songs that appear here ("Spider Song", "Paper Thin" and "Rainspell", to be exact) first appeared on her excellent solo album Belly. Much as a certain 1990s cartoon dog's presence demanded "Whenever Poochie's not on screen, all the other characters should be asking âWhere's Poochie?'", RVIVR should be asking themselves a similar question whenever Freas is not at the mic. To his credit, co-vocalist Matt Canino tries his hand at more melodic singing than the trademark yell he's developed, but it's hard to think of another duel vocaled band in punk rock where one singer is so clearly more talented than the other. Blink-182, maybe, if they count.

RVIVR have become infamous in punk rock circles for the aggressive manner in which they espouse their gender politics both at live shows and in interviews. On The Beauty Between, these topics are addressed more directly, albeit subtly enough to be applied to any number of situations in the lyrics of songs like "LMD" and "Wrong Way/One Way." The album title itself can be seen as a commentary on their dismissal of the gender binary.

The Beauty Between made a RVIVR fan out of a listener that was previously ambivalent and occasionally even a snarky detractor. If I could award a "Most Improved Band of 2013" prize, I would give it to them. This a well-rounded, ambitious and brave punk rock album, the finest of the year so far. If you weren't a fan before, give this record an honest chance. If you WERE a fan before, prepare to become a super-fan.