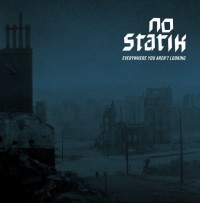 Some bands like to challenge the listener and San Francisco's No Statik are clearly one of those. The band's first album We All Die In The End showed that they could take the blitzkrieg style gruff hardcore approach, but that they also seemed equally at home doing something almost ethereal and the total opposite to the aforementioned assault-like delivery. However, Everywhere You Aren't Looking takes things a step further and the opening track, "Unclarified," takes up the whole of the first side, lasting around 14 minutes. The first ten minutes finds a song laced with samples, feedback and atmospheric noises, accompanied by the occasional vocals, and then is joined by a rumbling of drums which gradually turns into a much bigger and beastlier sound. Then from that emerges for a 90 second blast of intense hardcore before heading back to a more sedate ending. This is one hell of a side of music and the crescendo leading to that minute and a half of power is like ascending the highest point on a roller coaster, knowing that you are soon to face a short, sharp feeling that is exhilarating yet slightly overwhelming at the same time.

The second side is nine tracks much more aligned to that hardcore sound, with a sense of rage enveloping all of the songs. There is no quarter being asked nor given as No Statik bludgeon its way into the listener's senses, leaving them battered black and blue through a hail of guitars and drums that crushes all in its path. The other key element of No Statik's arsenal is clearly the female demonic vocals which don't so much as snap at your heels as go for the jugular; such is the ferocity and uncompromising manner in which they are spat out.

This album highlights a band able to provide "entertainment" using two ends of a spectrum, both of which are effective and engaging but in totally different ways. The funny thing is, I find both approaches as relaxing as the other but also both manage to invigorate me too.

To give you some more idea of where this band is coming from it features ex-members of the likes of What Happens Next?, Artimus Pyle and Scholastic Deth to name but a few.

Ramshackle Glory: Who Are Your Friends Gonna Be?