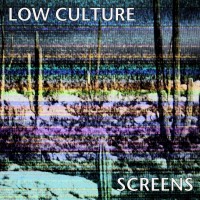 Low Culture's Screens will probably be my favourite album of the year, as well as being one of the best I've heard in the last ten years. Now that I've gotten that out of the way, it should give some idea why I've rated this as five stars and anyone who disagrees can... well, I don't care because you're wrong. Now on to the business in hand:

Low Culture are from Las Cruces, NM and features members from bands such as The Marked Men and Shang-a-Lang, both of which excel at punk rock played with big fat nods to garage and pop in suitable doses along the way. As good as both those bands were/are, I really do believe that the dozen songs on Screens take things to another level. It's not a case of a band creating something new, it's more that they've taken a punk/garage sound and used it as the foundation for a whole bunch of ridiculously cracking songs.

The album kicks off with the title track and it's like a greyhound out of the traps, hurtling along at top speed and taking me along for a short, sharp ride. However, there is no time to catch a breath from start to finish really, as there is a momentum throughout the album which doesn't dip in terms of pace or quality, although the final track "Magical Thinking" does slow things down a touch as Screens reaches its conclusion.

Don't be kidded into thinking that this album is just a blur, as there are huge chunks of melody within these songs, some great lyrics and hooks aplenty all delivered with a sense of purpose, which seems to be to do something that is simple and effective yet different enough to make it stand out. The production on the album, provided by Mark Ryan (Mind Spiders/Marked Men), is massively fit for purpose and gives a cleanish feel to the record, but one which does not feel overproduced and homogenised. The other thing that hits me each and every time I listen to Screens is the use of the cymbals: for me, this is what keeps up that frenetic pace, thus allowing guitars and bass to seem as if they're being played that much faster than perhaps they are.

Each listen provides me with another favourite track on here and one day it could be "Pills," the next it's "Screens" and then it could be "I Feel Your Ghost"; each song has its own merits to have it vying for the best track on the album. Additionally, I find various tracks just leaping into my head without any notice, and to be fair it's always a welcomed arrival, guaranteed to cheer me up.

There you have it, the top spot on my Best Of 2013 List is almost certainly decided now and if you consider yourself to have any interest in music (and I deliberately do not use the word âpunk' because I think this transcends genres) then give this a listen and see what you think (but I reiterate, if you don't like it, I don't care!).