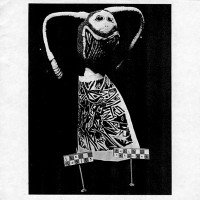 Before there was Rudimentary Peni, there were the Magits.

Although the band started out as a four-piece including Nick Blinko and Jon Greville, both of whom would later form Rudimentary Peni, as well as Martin Cooper and a fourth person lost to time, by the time they recorded their only release Fully Coherent, the band had decreased to just Cooper on vocals and Blinko on synths.

Although the album was released at the height of English boot boy punk, the Magits were wildly different than their contemporaries. The only instrumentation is Blinko playing simplistic, spooky synth lines that sound as though they were ripped from the Alien soundtrack. Meanwhile, Cooper reads Blinko's anguished poetry with a cold reserve.

"Disconnect" opens with a orbital pulse supported by a haunting, almost b-movie bed of minor chord buzzing, before Cooper speaks in a sullen voice, "We are underqualified to see life in the vacuum / without x-ray eyes / Don't defy authority if you have the energy / Disconnect /Disconnect / Disconnect / Disconnect / Disconnect." And then the song is over. All four songs follow this same sort of pattern, in that they are whittled down to their bare essence to the point where they are as much songs as they are horror-poetry.

The band do seem somewhat self aware, though. They seem to comment on the strange, almost comically minimalistic nature of the songs on "Detached" which opens with a whipping synth riff and Cooper stating "Avant Garde / Avant Garde / Avant Garde / Please stop at this junction / my body is a mess / rebuild in the factory with minimal distress(?)." And like its brothers, that's the entirety of the song.

One could compare the Magits to the American band Suicide, who also dealt in minimal synths and distressed vocals. It's unlikely that Blinko knew of the group as Fully Coherent was recorded when Blinko was but 17 and the Suicide self-titled release had not yet been imported into the UK. That's why it's so fascinating that the two share a similar exterior texture. But while Suicide seemed to deal with the annihilation of oneself as caused by exterior, modern forces, Fully Coherent came from a darker place. While the effect of modern systems upon the person are explored in the four-minute release, there also seems to be a twinge of the deeper dread. An exploration of what it means to be mortal and finite. Blinko would go on to explore these concepts with more horrifying depth two years later with Rudimentary Peni's first EP.