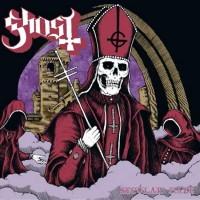 In 2011, Ghost took the metal world by storm. Heavyweights like Phil Anselmo and James Hetfield wore their t-shirts, they toured the US with Mastodon and Opeth, and every blog even remotely associated with heavy music wrote about them. They've undergone some cosmetic changes since then (that pesky little B.C. added to their moniker in the states for legal reasons, vocalist Papa Emeritus rebranding himself Papa Emeritus II for who knows what reason), but musically they've held fast to what made everybody love them in the first place. "Secular Haze" is the first new music we've heard from the group since their fantastic debut Opus Eponymous, and it will likely neither gain nor lose them any new converts.

The haunting organs that were in play on Opus Eponymous tracks like "Genesis" are much more prominent here. The sound lands somewhere between church choir of the damned and a haunted carnival. It's a sound that would be suited to following Scooby Doo and the rest of the mystery gang down long corridors. We are treated to a solid minute of this before Papa Emeritus, sounding more like King Diamond than ever warns us that "The fog is here." The mood is immediately set.

The group have held onto to their satanic lyrical shtick, but they have their tongues planted just far enough in their cheeks to keep this motif wacky and fun, rather than becoming overbearing and off-putting, as can often be the case with more self-serious bands, such as their Swedish brethren Watain. That Ghost have managed to maintain a mystique about them that only adds to the fun. Yeah, they probably feature members of Swedish thrashers Repugnant, but that spoils things a little.

It's nice that Ghost, B.C. or no, haven't branched off too far from what made the metal scene take note them in the first place, but hopefully their upcoming full-length Infestissumam will find the group more willing to take risks. In the meantime however, "Secular Haze" is an enjoyable taste of things to come, and with releases from Kylesa and Kvelertak imminent, 2013 already looks to be a great year for metal.