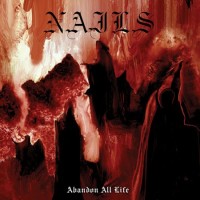 No one ever said that Nails were easy listening. But while the band seem to strive to sound as mean and nasty as possible, they've always kept the hook alive in their music. Perhaps that's why they draw heavily from both hardcore punk and death metal. On one side they utilize a full throttle, ripping energy attack. But on the other, and unlike so many hardcore bands, they remember to keep the riffs in the music, instead of just reducing themselves to a noisy mass. Although their 2009 debut Obscene Humanity had some crushing hooks, at times, the songs bled together. 2010's Unsilent Death improved on the sound, giving each song more character while retaining the band's fierce minimalism, but still, it tended to devolve in a few spots. Their new LP Abandon All Life isn't radically different from their previous releases, but it is the best presentation of Nails' style to date.

Immediately, "In Exodus" makes it clear that Abandon All Life is the group's most focused as well as their most plotted album. Winnebago-size riffs chop downward in a rapid pace, giving the feeling of an oncoming storm before the band erupt into a faster, more frantic attack. The song, and also the album's, biggest benefit is the clarity of sound. While Nails have usually used a thick, metallic guitar tone, here, it's cleaner than before and allows for the full hue of Todd Jone's intonation. Although the sound is still metallic, that classic Harley Davidson revving heard in so many classic crust punk guitar lines creeps through, that frankly, makes the music "rock" moreso than that of their contemporaries.

But the band understand how to use minimalism to their benefit. All the songs have a similar texture, with tactical, but rushing drums, focused by gnarly guitars and drums, and Jones' screaming. Yet instead of these sounds becoming route, the band know to frequently change song structure through the album, keeping it sonically interesting instead of repetitive. "God's Cold Hands" starts with a juiced-up D-beat, only to lumber down into a smashing breakdown halfway through. Though it's only a minute long, "No Surrender" skips and jumps so much that it verges into grindcore, or dare I sayâ¦ improv jazz territory?

Lyrically, the band continue its use of broad criticism of the current human condition to elicit a bigger point. They still attack politics and socio-interactions from a wide base without giving so many specifics, to avoid tying the music down to any one purpose. It's as if, even when the band are talking about a specific situation, they are more interested in addressing the concept of anger, hatred and loneliness, then the fodder for the song. As the title track suggests, the band have assessed humanity, and even life itself, and found it petty and wonting. It works, but because the band members are within the class so denigrated by the lyrics, it also provides an interesting tunnel into their minds and motivations.

The biggest surprise is the closing track, and longest Nails song to date, "Suum Cuique." At five minutes, it practically the band's "Dopesmoker." Through its twists and turns, the band showcase what they've done in the past before finally twisting upwards and then submerging full force into thick, guttural muck. It's hard and effective, but despite the sheer volume, works as almost a breather after the album's previously nine-track assault.

Abandon All Life isn't a radical departure, but it is the most clever use of the band's tools to date. So that leaves the question, if this is the peak of what they've done so far, where will they choose to go next? Back down the mountain or onto other heights?

Circa Survive / Minus the Bear: live in Providence