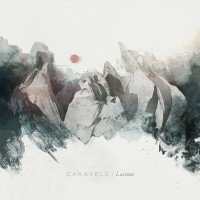 Been a fan of Caravels for quite a while. This is one band I hoped would get the recognition that Touche Amore and Pianos Become The Teeth receive, not just for accolades' sake but because they make brilliant music. Lacuna is the record to justify my claim. With intricate guitar work, the brooding melodies and powerful climaxes, the appeal should come as no surprise when you pop in this album.

The self-titled opener "Lacuna" is mesmerizing in its haunting disposition. It's solid and chock full of enigmatic impulses on the guitar, which again cement why Caravels are right up there with Departures, the Saddest Landscape and the now-defunct We Were Skeletons in terms of quality. It's a preemptive strike to signal Lacuna's intent.

Topshelf has a knack for releasing indelible and gut-wrenching records and Caravels continually test their mettle. The scope of dangling guitar lines and circling octaves add so much energy to a record that plays off like one big track dissected into ten smaller ones. "New Zealand" and "Hundred Years" are filled with repetitive hooks and that gushing cathartic vibe the band have come to perfect. The anxiety, constant murmurs and layered riffs add a lot of subtle melody that grips and controls the record's flow. It's hard to lose attention despite the first couple tracks sounding a tad similar. The latter proves pounding and visceral; and that's the intimate consequence this band love to throw at you. There's a latent distress in the rhythm and this track offers dormant, calming guitars leading into a collision of distortion.

The infrastructure Caravels embed fits perfectly and satisfies fully, with enough nods to their previous work, Floorboards. That record held a densely optimistic temperament which is augmented, and captivatingly so, on Lacuna. I'm sure there will be debates revived about "the Wave" and such but when you take in "Hanging Off," that wave begins to crest, metaphorically speaking. It's my absolute favourite here. The distorted melody is to die for. Listening with patience helps understand the hidden dynamics and comprehensive intensity that Caravels extend. They've always guided their sound practically to a screamo stance but somehow managed to find ways to innovate. It's enriching to embrace their start-stops and repetitions. The balance of the record is in fine symmetry and as the latter half winds down, and it's noteworthy that this may be the stronger half of the record, it's all-in-all a fine mix. Latching onto the layers assuaged the minor doubts I had if they could cut it.

"Ordinary Lives" and "Dog Days" are built on unpredictable transitions, aggression-based chords, innate complexities, deft-picking pulses and slightly erratic scratches that give a rough and unrefined feel to a record that's polished in its own near-perfection. Caravels are on the cusp of something great and I think Lacuna will expedite their progress. Crescendos are in bulk and they extend their strengths musically, which is undeniably what makes this record one of the best for the year thus far. This album inundates with what Caravels offer best - a sound contrived to blow your fucking socks off. Mission accomplished.