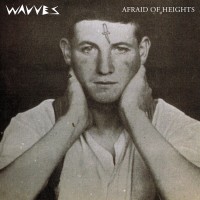 When a band have found a career on songs about smoking weed and being lazy, their audience can be forgiven for not expecting them to grow up. Indeed, San Diego, CA's Wavves have neither matured nor progressed in any substantial way on Afraid of Heights, their follow up to 2010's stoner-punk opus King of the Beach. In sticking with what they do best, they've gotten even better at it. This is a record that's every bit as enjoyable as its predecessor, even if it is ultimately more of the same.

Any listener who cares enough will likely have already heard the album's first two tracks, "Sail to the Sun" and "Demon to Lean On." The tracks make for one hell an opening 1-2 punch. "Sail to the Sun" is a pop-punk bruiser that ranks among the best songs the group have written. However, it could be argued that it is questionable to release the first two songs of the record, since they're likely to be overplayed by avid fans - diminishing the impact of this incredible opening.

The only obvious change in sound on Afraid of Heights, other than the production of John Hill (noted for his work with acts like Rihanna and M.I.A.), comes in the form of a hefty dose of Nirvana influence that wasn't so apparent on previous releases. "Dog" recalls Nevermind's "Polly" both in its vaguely anthropomorphic lyrical content and its lumbering bassline. "That's On Me" opens with a lyric about a girl soaked in bleach, and the title track (with guest vocals from Jenny Lewis) features lines like "I'm a creep. You drain me." These sly lyrical hat tips are not unlike what The Gaslight Anthem did with Mr. Springsteen on The 59 Sound.

As was the case with King of the Beach, Wavves are at their best on Afraid of Heights when they're in full-on punk rock mode. The more psychedelic pieces, such as "Mystic," with its refrain of "When I'm highâ¦," stretched out progressively further and further which would probably work better if you, in fact, are. For sober listeners, tracks like the more upbeat "Lunge Forward" and the aforementioned Nirvana-influenced tracks will be the clear standouts.

With Wavves, you know what you're getting, and while Afraid of Heights offers no major surprises, it may be their finest hour yet. If you haven't cared for the group in the past, there's probably nothing here that will change your mind. However, if King of the Beach had you begging for more, your fix has arrived.