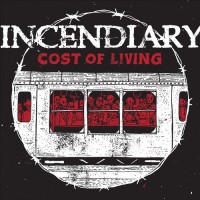 Closed Casket Activities may not be a household name but with new records from Twitching Tongues, Disgrace and Incendiary, the label have put themselves in the position to be an antagonizing force amongst the heaviest of hitters. Of the three, Long Island's Incendiary have been something of a dark horse within hardcore: A humble band plugging away, rarely garnering the universal recognition they rightly deserve, however exceeding potential on every subsequent release. Cost of Living documents Incendiary's increasing intensity from Crusade with ten cuts of solid '90s hardcore riffing, a la Indecision or Strife.

Steadily, the band exercise compelling tensity with the dissonance-tinged opener, "Zeitgeist." When that tension finally breaks, a nice walking-paced verse section emerges littered with winding fret-play. "Suffer oppression from the politics of fear / The Generation of hopelessness is here" bursts vocalist Brendan Garrone, reminiscent of a focused Zach de la Rocha in pitch. Like their influences, Incendiary are a band with a message, albeit an aesthetically bleak one. Garrone (the lyric writer, presumably) uses a particularly threatening tone in his verses. Whatever his politics may be, he sure does mean it. Perhaps the lyric that struck the hardest E chord is the poignant refrain from "Deed Before Creed": "Our lives begin on the day that we open our eyes and realize this world will never provide." A pessimistic conclusion, but Incendiary aren't one to sugar coat.

Besides lyricism and the rhythmic finesse between dual guitars, one of Incendiary's most respectable traits is their avoidance of common trappings in modern heavy hardcore. For one, there's a contrasting high end to their shifting and pummeling low end, similar to 108. A good example would be "Burnt Sacrifice" that layers palm muted chords with a dirty guitar lead that's so neurotic, it begs to become piercing artificial harmonics the entire phrase. In addition, Incendiary move through drastic tempo changes mid-song in a style of music that, nowadays, likes to set the metronome once and run with it. Such variation gives the performance a sense of realness next to more sterile contemporaries.

It's worth devoting an indentation to the vibe of Cost of Living. Not only are the recording tones on the proverbial nose, the art work by Jon Contino perfectly paints the record in despair and hopelessness. Both reach an equilibrium of hardcore and metal that's imperative to the completeness of Cost of Living.

So yeah, it's the whole package. Admittedly, Cost of Living has a pretty specific appeal and may not be in the spirit to convert. But for fans of heavy music, it's an essential listen for 2013.