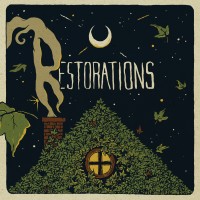 Some records don't feel important upon first listen. Sometimes the stars don't align like they're supposed to, sometimes the listener isn't in the right frame of mind, sometimes the band's intent gets bogged down by various ancillary factors. Hell, sometimes it just takes time for the impact to really set in. LP2 feels immediately important. It's the sound of a band in Restorations who have always had an interesting predisposition but never figured out how to clearly convey it until now. They hit it out of the park.

"D" has already been covered, but it's still a banger and a perfect choice for an opener. It's upbeat, loud and heavy all at the same time, and serves as a nice "gateway" to the band; keep in mind that this song will serve as the first impression for a large amount of new listeners. It leads nicely into the organ-assisted heaviness of "Let's Blow Up The Sun" and the dissonance of "Civil Inattention."

Although Restorations have streamlined their sound just a bit, they're still really hard to pin down or place into a neatly-opened genre box. There's less of a distance to their music on LP2, but it isn't less grandiose–if anything, it's even more triumphant. The interplay between instruments is impressive throughout, especially in the initial moments of "Kind of Comfort"; the manner in which the bass takes the lead throughout most of the song and only occasionally gives way to a soloing guitar is really cool. "In Perpetuity Throughout The Universe" serves as an elongated build-up to the rousing "New Old," which uses quick riffs, quicker drums and a bed of organ sounds to help gets its message across.

The final third of LP2 barely lets up; even the heavy, airy "Quit" alternates its bass-centric verses with huge, open choruses. Shades of Americana abound on "The Plan," somewhat calling back to some of the sounds forged on Restorations' debut full-length. The beginning of six-minute closer "Adventure Tortoise" is a force of ambient noise and distant guitars that eventually crash into a louder, heavier base that's positively urgent. It's a rousing way to close an album in LP2 that at once forges new ground but also feels reflective; it's smart, nuanced and textured, but also the most accessible thing the band have done. It LP2 doesn't make Restorations huge, nothing will.

David Bowie: The Next Day