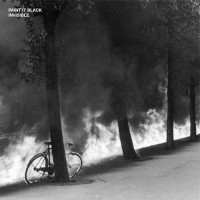 There isn't a more vital modern hardcore band than Paint It Black. Plenty of bands are more active and/or more hyped, but none of them replicate the sheer vigor and ferocity of PIB. Given that the band have been much less prolific in recent years, it's sometimes easy to forget just what a fucking powerhouse they are, and on Invisible, their first new music in four years, they're firing on all cylinders. Nothing is safe. No one is spared.

Paint It Black twist and stretch the sonic definition of hardcore far more than they're ever given credit for, and that continues on Invisible. The dissonant heaviness of "Greetings, Fellow Insomniacs" sets the table for the speed and melody of "Headfirst," which really, is almost a pop-punk song save Dan Yemin's vocals. Speaking of Yemin, he's never sounded rawer or realer than he does on this recording, which given the band's track record is no small feat. He's getting louder with age.

It's not just Yemin that makes PIB, though. The rhythm section, maybe the most overlooked aspect of any good hardcore band, shine on "Props For Ventriloquists" and "D.F.W." The rapid-fire bass and drums of Andy Nelson and Jared Shavelson respectively converge to form the background–and occasionally emerge to the foreground with great success–of these songs.

The title track, like the aforementioned opener, is a slower, heavier affair that features near-cathartic instrumentation in its climax and incorporates some spoken banter–recorded live at the band's secret Philadelphia house show in December–that promote everything that makes hardcore great: Open-mindedness, a safe place for the exchange of ideas and a distinctly non-violent hostility toward the status quo. It's a roaring comeback for Paint It Black, who once again are in a class of their own on Invisible.

Editor's Note: Dan Yemin writes in with this correction: "Although the "Go!" In the breakdown of "Props for Ventriliquists," was indeed recorded live by the "actual, beautiful punks of Philadelphia," at the golden tea house, the banter that's layered under the feedback at the beginning and end of "Invisible," is sampled from a live John Henry West recording from 1993. JHW was one of the dozen or so bands that my musical hero, Sarah Kirsch (who was Mike Kirsch at the time), created between 1988 and 2012, when she died of an unusual cancer shortly after coming out as transgender. I saw JHW play in a NJ basement the night before leaving for the 2nd Lifetime tour in the summer of 1993, and it was actually transformative. It raised the bar for everything I thought hardcore punk could be, as did many of Mike/Sarah's later bands, especially Torches To Rome."

Alkaline Trio: My Shame Is True