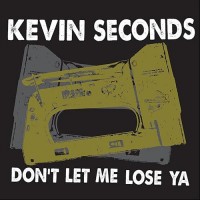 At first I was a little underwhelmed by Don't Let Me Lose Ya. I'm not the biggest Kevin Seconds fan, but I thought Good Luck Buttons was fantastic from the very first listen. Don't Let Me Lose Ya has something about it that takes time to grow through repeat listens. The thing, if I had to pinpoint it, is most likely the earnestness of the songs.

"On the Hill," for instance, has that accusatory attitude found in teenage punk songs, but Seconds isn't a teenager. On the song, he sounds like he is calling someone out on their shit ("well, you pray to god / yeah, you bow to Jesus too / but there's nothing Christ-like in the things you do"), but there's a slight amount of pity accompanying it. Seconds sounds well aware of life's grey areas and while people need to be kept in check, Seconds sounds like he would rather have this person change their ways than simply get even with them.

The earnestness continues on love songs like "Don't Let Me Lose Ya" and "The Only Drug I've Ever Done" that, in all their loving, don't shy away from acknowledging the bad parts of the relationships. "Lose Ya" sounds like the words of a man deeply in love who isn't quite sure he's worthy of the other's love. "Only Drug" states that the subject of the song is the only drug Seconds has ever done ("besides the small amount of pot I smoked in high school.")

Where things truly get good are on the second half. The last three songs are the high point of the album. First, we get a love song sung to a dead cat. One might find it hard to imagine Seconds' song comparing to, say, "Without Love" by Propagandhi, but the two songs are apples and oranges. Where Propagandhi took a bit more of an existential viewpoint on the death of Chris Hannah's cat, Seconds focuses on the small, day-to-day company of a cat that one doesn't realize the importance of until it is too late. On "Oh Rhonda," it isn't made immediately clear that the song is to a cat â which makes it all the more heartbreaking to hear Seconds singing "Rhonda, you were a better friend than me / you gave me ears when I could barely see / you never pointed fingers even when we both knew I was wrong."

Following are "Masterpiece, Unfinished" and "The Elements and You." "Masterpiece" continues Seconds' tendency to sing incredibly honest songs. As a counterpart to his love songs, this song seems to be sung to either a peer or someone Seconds looks up to as he sings "you're the only legend that I know," but never shies away from the flaws of the person being addressed. As Seconds opens "Elements," he lays out a history of struggle while trying to leave a positive message. He doesn't hold back, pretending as if things will naturally get better, but acknowledges the bumps along the road â which seems like it might be enough sometimes.

Seconds has been churning out solo albums for a while now and he isn't showing any signs of stopping. My worry is that people are taking all the fantastic songs for granted because they continue to flow out at such a rapid speed. In the digital age where an album can be downloaded and listened to for all of five seconds, I fear that people didn't give this album the time required to fall in love with it.

You can download it for a donation and listen to it for all of five seconds here.