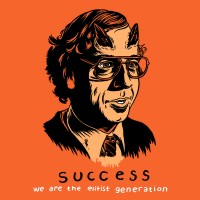 Sometimes a band come out of nowhere and hit you with a record that, whilst maybe not mind blowing, actually provides an enjoyable listening experience and Success have managed to do that with me. I was pointed in the direction of the band by a friend who is quite often picky about what he likes, so I knew he wouldn't recommend anything that was a waste of my time and I was right.

The twelve songs on this, the band's second full-length (it's been four years since their self-titled debut long player was released) can be classed as mid to fast paced melodic punk which walks on the edges of pop-punk at times, flirts with a Less Than Jake sound on occasions and only misfires on one of the tracks, which isn't a bad result on any record.


"Way Back Home" kicks things off with a nice crisp guitar sound that, if you're like me, hooks me in pretty damn quickly and vocally it's difficult to miss the similarities to Less Than Jake almost immediately. The song itself is full of uptempo melodic goodness that gets my head nodding and feet tapping, and it's a promising beginning.


There are a handful of very good songs on this album which help make it stand out, and I'd point you to "Heading Back to Zero" (with its hints of Face to Face), "Head for the Hills Mama," "Nowhere Kids" and "Too Rich to Fight" (which makes good use of the intro to Dag Nasty's "Under Your Influence") as examples of the highest points on the album. All of these show that Success do the slightly pacier songs better than anything that takes the foot off the pedal a bit.


There is one clunker here and the (dis)honour goes to "Hearts of Gold" which unsurprisingly is an acoustic track that stops the flow of the album in its tracks. Fortunately the band place three of the aforementioned high points in quick succession after the lowest point, quickly setting things right again: "Loretta" follows on from that trio of goodness and it's a rambunctious Less Than Jake-like offering that offers up an easy singalong chorus. Finally, "Pros and Cons" keeps that Less Than Jake vibe in place, closing the album quite nicely and leaving me with the need to start the whole thing all over again