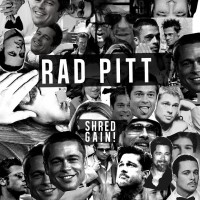 I Hate It Records

A lot can be achieved when four lads get together with nothing more than a huge chunk of individual musical ability, some time on their hands and a short-term plan. In this particular instance, Rad Pitt is the result of such an equation and its endeavours are to be found on this five track release which could well be the full extent of its recorded output, if as it seems, the band's existence is purely set up for this one release and a singular first/last live appearance.

With members from local Plymouth (UK) bands including Crazy Arm, Bearfight and Friendly Terrorist Orchestra, this could have gone any number of ways but what Rad Pitt has actually come up with is a pretty jaw dropping explosion of punk/hardcore that is thick and crusty as well as having an organic and unrestrained. Edge. With hints of d-beat and metal thrown into the mix this isn't a collection of pleasant ditties for suitors to use to gain the affections of potential partners; it's much more a case of there being a chance to lift the lid on a pressure cooker the size of a double decker bus to allow life to continue with a bit less tension and stress following the cathartic paroxysm.

It's quite difficult to separate the tracks too much as all five shake me to the core with their intensity and bring to mind bands such as Ceremony, Double Negative, American Nightmare, Die Kreuzen and even a bit of the Cowboy Killers which should provide a few suitable reference points. "Pukes of Hazard" is first up and opens with some feedback, a well-placed Trailor Park Boys sample and then it's like the catch on that pressure cooker is flipped open unleashing an unholy racket which spews forth like lava from an erupting volcano.

"Even The Mona Lisa is Falling Apart" is the most varied of tracks on the EP showing that the rage is under control but only barely as Rad Pitt offer up quite an intense middle track which despite my suggestion that it's hard to separate them, has become my firm favourite of the five songs on offer.

I certainly wasn't expecting to get yet another damn fine band out of my current hometown, but it does seem that the creative juices are bubbling over nicely amongst those with a will and a way. The more times I play this, the more the songs settle nicely in my head despite their abrasiveness; there is more than enough going on to prevent this from being just a flash in the pan, and it is one of the finest releases of the year so far.

Given that this was recorded in the back room of The Last Shop Standing Record Store here in Plymouth, the band has done a mighty fine job in getting down such a powerful piece of work.