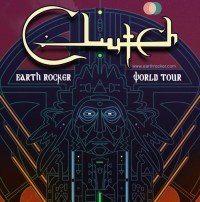 Some records hit you at exactly when you need them to. For this writer, Clutch's 2004 stoner-rock masterpiece Blast Tyrant was one of those records. It caught me in my awkward teen years, right as my tastes were transitioning from the Iron Maiden and Metallica albums I grew up with to the punk rock records that dominate my record player to this day. It had the aggression of metal with the attitude of punk, and it was downright weird. While I've certainly enjoyed Clutch's subsequent releases, none of them have ever quite captured that same magic, so when I heard they were re-teaming with Blast Tyrant producer Machine for the first time in nearly a decade, the Germantown, MD group had my full attention. Earth Rocker is a record that manages to be more aggressive and confrontational than their past few releases, without sacrificing an ounce of their melodic songwriting chops.

While albums like 2005's Robot Hive/Exodus and 2008's From Beale Street to Oblivion featured organist Mick Schauer and found the group expanding their sound through the exploration of new sonic textures, Earth Rocker finds the original quartet narrowing their focus to face-punching rock and roll. The opening title track commences the proceedings in a speedier, more traditionally heavy metal way than we've heard from the group in a long time. "Cyborg Bette" is even more intense. Their time spent touring with MotÃ¶rhead really shines through on these tracks.

Which is not to say that Earth Rocker is a one-trick pony; underneath its buzzsaw guitars and shouted proclamations of "I'm a war monger, baby. I got blood in my eyes!", "D.C. Sound Attack" is a harmonica-laden track full of southern boogie, and "Mr. Freedom" is downright danceable. Meanwhile, "Gone Cold" is a downtrodden, mostly acoustic number, with a spoken word performance from vocalist Neil Fallon that recalls Tom Waits tracks like "Shore Leave" and "9th & Hennepin."

Earth Rocker is an apt title; this album rocks in a way that doesn't require much dissection. This is a record meant to be played at maximum volume, an album that makes everyday tasks like standing still and obeying posted speed limits near impossible. It might not reach the heights of Blast Tyrant, but not much in the genre does. It's certainly Clutch's most enjoyable album in a good number of years, and any fan of the group's post-Pure Rock Fury era would do well to give Earth Rocker a spin.

Allison Weiss: Say What You Mean