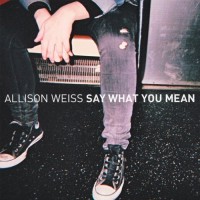 Brooklyn singer/songwriter Allison Weiss burst onto the scene in 2009, through a wildly successful Kickstarter campaign to release her first full-length ...Was Right All Along that reached its goal in ten hours and tripled it in two days. Whether you agree or disagree with the notion of an artist crowdsourcing as a means to release their work, what Weiss accomplished through creative fundraising incentives, effective marketing and outside-the-box thinking is impressive. But none of that matters, of course, if the songs aren't good.

Now, we have Say What You Mean, Weiss' first LP for No Sleep Records. It's a more than competent collection of heartfelt indie-pop that traverses a few different moods and sounds, but remains about as lyrically direct and tortured as music this light can get. Nothing's caked in allegory or left to interpretation; Weiss may lyrically portray confusion or feelings of uncertainty throughout the album, but it's all squarely on the nose and perfectly relatable to virtually anyone that's ever been in a relationship with someone–which is most of us.

"Making It Up" opens Say What You Mean with tempered guitar work, catchy keys and Weiss' somewhat subdued vocals. Weiss doesn't display a ton of range as a singer, but these songs don't necessarily require it; she's good at conveying mood nonetheless. She does soar in the choruses of "One Way Love" and the especially excellent "Don't Go," both of which are faster-paced songs with layered acoustic and electric guitars opening things up a bit, in direct opposition to some of the more curt, tension-soaked cuts like "Wait For Me" and "Hole In Your Heart." The two moods do amalgamate from time to time though, most notably on "Nothing Left," which slowly ascends toward an awfully anthemic climax.

If nothing else, Say What You Mean is eminently listenable and thoroughly appealing. Its accessibility will almost ensure that Allison Weiss becomes a star. No Kickstarter necessary this time.