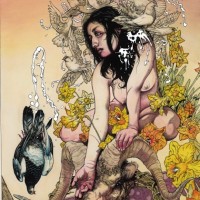 "Dude, what the hell, are you just listening to noise?"

Those were the words spoken by my Taylor Swift and Ke$ha loving roommate as he walked in the door to find me listening to the closing strains of Kvelertak's nearly nine-minute epic "Tordenbrak" from their sophomore effort Meir. He wasn't entirely wrong. "Kvelertak" is Norwegian for "chokehold" and it's a pretty accurate descriptor of the group's sound. They take plenty of influence from their Norwegian countrymen, falling somewhere between the peppy and energetic punk-n-roll of Turbonegro and the second-wave black metal ferocity of bands like Mayhem and Darkthrone.

Not much has changed since their 2010 self-titled debut, musically or cosmetically. Like its predecessor, Meir features gorgeous album art by Baroness' John Dyer Baizley, and once again the group recorded with Kurt Ballou of Converge and toured extensively with them and Torche last fall. It's interesting that Kvelertak are associated so closely with the American metal scene, as their sound is very distinctly Norwegian.

The formula they established on their debut, which is to say, simple punk rock riffs, with sporadically scattered melodic rock guitar leads and shouted black metal vocals is still very much intact on Meir, with songs like "Spring Fra Livet" and first single "Bruanne Brenn" being prime examples. While I might not speak the language, vocalist Erland Hjelvik sounds so convicted in his growls that it's hard not to be swept up in the fun. He may not have much vocal range to speak of, but he does his one trick well.

"Trepan" manages to switch things up a bit, in that it's the most purely black metal song the group have recorded to date, and were it not for the modern production quality, it wouldn't sound entirely out of place on Transilvanian Hunger. On the other end of the spectrum, closer "Kvelertak" finds the group joining groups like Iron Maiden and Motorhead, who have titled songs eponymously. If this is the track the group have chosen as their theme song, it's a solid selection. Musically speaking, it's the most straightforward rock song here, and with a different vocalist it could almost fall under the pop-punk category. Most songs fall somewhere between these two extremes, and will appeal to fans of Satyricon's more recent rock-influenced records.

So while it's hard to imagine any fan of the first Kvelertak record not enjoying Meir as well, the lack of any major progression is a tad bit disappointing. The group's blistering punk/black metal/classic rock hybrid came as more of a shock the first time around, and there's nothing as earth-shattering as the melodic guitar break in "Fossegrim" from their debut to be found here. Still, Meir is a highly enjoyable record from a band who has already carved out their own niche in the metal scene.