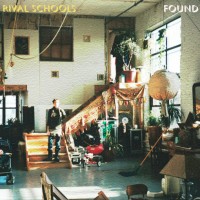 While the wait for Found, Rival Schools' real second album, isn't quite on par with the delay behind My Bloody Valentine's m b v (about 20 years) or Wire's Change Becomes Us (about 24 years), it's still another great addition to 2013 releases I never thought I'd see. Sure, the tracks leaked years ago, and a few even ended up on reunion LP Pedals, but there's nothing like holding the real deal in your hands. Here, some 10 years later, is that follow-up to United By Fate.

When Rival Schools resurfaced with Pedals in 2011, plenty of Walter Schreifels devotees squealed with glee, but the record sounded like a totally new project. Debut United By Fate sounded like a looser, punker sequel to Schreifels' last band, the revered post-hardcore outfit Quicksand. Pedals skewed towards fuzzy indie rock. Played next to each other, they sound like the work of two different bands. Found acts as the bridge between the two.

Maybe the best example of this shift is "Sofia Loren," which was reworked as "Shot After Shot" on Pedals. Here the song packs way more urgency, although it lacks a proper chorus. I wouldn't say it's better than what it finally became because of that huge hole where a hook should be, but the energy here is palpable. Other tracks, like opener "Dreamlife Avenger," have that same sense of groove.

At the same time, Found packs plenty of ethereal touches, such as the dreamy "Missing Glider" and "Tell It All to Me." A closing cover of Buzzcocks' "Why Can't I Touch It" is an interesting choice; just as it marked a sonic shift for Buzzcocks, so too does it do so here, albeit belatedly.

It's surprising that Found wasn't released sooner, given that the final product sounds crisp. Also surprising: no CD version, and no download code for this vinyl-only release. Then again, Found has been a curiosity for diehard Schreifels fans for so long, why change now?