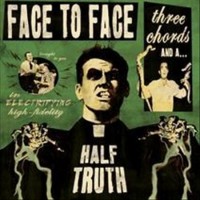 The first time Face to Face really fucked with their formula was with 1999's Ignorance is Bliss, an alternative-minded record that buried the band's pop punk roots in layers of guitar noise (it's basically their Dear You). It also alienated a fan base that hated change (kind of likeâ¦Dear You). That record aside, the band have stuck to a pretty solid template: rapid fire drums, absurdly great basslines, huge choruses. While their records have at times played with heaviness (How to Ruin Everything) and hooks (Face to Face), the band's output, while totally fun, has stayed consistent in sound. Indeed, core members Trever Keith and Scott Shiflett weren't able to really explore other styles until they broke up Face to Face and participated in acts like Viva Death, Legion of Doom and Real Space Noise.

Face to Face's new album, Three Chords and a Half Truth, doesn't shake things up quite like Ignorance is Bliss. It's not that daring. But it still finds the group changing styles, going from punk rock to more traditional rock. In other words, these songs are so, so much slower than anything on Don't Turn Away.

For a while, that's not even much of an issue. The record starts off with the two-hit combo of "123 Drop" and "Welcome Back to Nothing," two rabble rousers in the tradition of Social Distortion and the Who. These songs will probably sound out of place with Face to Face's faster material live, but they still rock. Except then a couple of forgettable Reactionary throwbacks pass the time before "Bright Lights Go Down" presents something resembling a sturdy chorus (however clichÃ©-ridden). Only problem is that "Right as Rain" is track six, meaning we're halfway through the album and things aren't looking good.

The back half pretty much sounds like the first half. Keith is shooting for inspirational rockers (and nearly gets them on the catchy "Flat Back" and "Jinxproof"), but the songs are ultimately too homogenous. Some, like "Marked Men," don't really end so much as peter out, as if the record was a few revisions away from greatness. While it's commendable to hear Face to Face attempt something new, one has to wonder why bother. These songs do not gel with their previous output. They've already established other bands for exploring other sounds. Three Chords is decent, but I'm not sure who these songs are for.