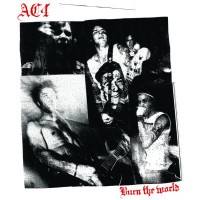 It would be remiss not to mention that Swedish band AC4 include a member of the much (overly?) venerated band, Refused, and now I've shared that piece of information with those of you who were not aware of this fact, I can safely move on with this review. Burn The World is the second long player offered up by these Swedes, following on from 2009's self-titled release, a debut that really took a short, sharp, shock approach to hardcore mixing in a 1980s fury with a more modern sound, as fifteen tracks were unleashed in a frenzied and enjoyable attack.

The follow up goes one better in terms of the number of tracks and that is not the only difference to be found on the new record; the sound of the band is much beefier now, with the low end really rumbling away (the drums especially are more noticeable in this respect, and I recommend listening to this on headphones to get the full effect) and there is also more of an American rock influence to be heard at times, coming through prominently in the vocals on occasions. The overall result is that, even with a more expansive and varied sound on the whole, AC4 manage to retain the bite that was displayed on their debut album although at times, other influences take over creating a slightly less vitriolic approach.

However, Burn The World maintains enough of a hardcore snarl to satisfy my needs, and where AC4 throw in a more mainstream sound ("Die Like A Dog" is more of a straight-up thundering punk/metal/rock track, which highlights the changes being incorporated), a hint of Oi! (as to be found in the rambunctious "Breakout") and also the American vocal inflections ("Diplomacy Is Dead"), it ensures that they've not just gone out and rehashed AC4, which might have been the easiest option to take, rather it being the case of the band broadening its sound but without any notable loss in the ferocity heard on the first record; it's just spread out a bit more. I'd also add that on the opening track "Curva Del Diablo" I even manage to pick up moments that remind me of CIV, showing that AC4 are more than intent to take from all the ages of punk/hardcore to create what they want to spit out. Throughout the record, the guitar creates a perfect hardcore foreground with some screaming solos and leads added in, whilst the rhythm section really does pound itself to the point of no return, with the aforementioned drums benefitting from an extremely strong production job.

For me it's songs like "All Talked Out," "Morality Match," "Burn The World" and "I Won't Play Along" that really give me a kick in the pants but I do really enjoy the tracks which take a slightly different approach, as they add to a more varied album which over half a dozen plays so far has grown more on me a lot after my initial wariness over what seemed like too much of a âbig budget' kind of change in terms of the whole production of the record. The record reminds me a lot of G.B.H.'s Midnight Madness and Beyond in terms of its general sound, more so with the guitar, although AC4 take things up a notch or two in terms of speed to eclipse what the UK punks produced back in 1986.

So, AC4 can still do the hardcore stuff and do it extremely well, but they've added in a few other dimensions that keep things moving along with a fresh feel and in doing so have created a damn fine album. I'll whisper this, but give me AC4 over Refused any day.

Face to Face: Three Chords and a Half Truth