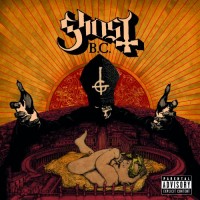 For a great number of heavy metal fans, the career trajectory of Linkoping, Sweden's Ghost (or Ghost B.C. if you live in North America), has been one of the most exciting things to witness in quite some time. In the span of a few short years, Papa Emeritus and his band of "Nameless Ghouls" have gone from being the talk of the metal underground, earning their cred with approval from folks like Fenriz of Darkthrone, to playing ABBA covers with Dave Grohl on drums and selling custom sex toys for hundreds of dollars. They're nothing if not unique, but none of the theatrics would add up to much if they didn't have some solid tunes to back them up, and as anyone familiar with the group's past work can attest, they most certainly do. Infestissumam, the group's sophomore effort and major label debut is the end result of a record deal as allegedly high as $750,000, so listeners will inevitably have to ask, was it worth it?

Members of Ghost (Let's be honest, no one actually calls them Ghost BC) have said repeatedly in interviews that their music is meant specifically for entertainment purposes, so with that in mind, it makes sense that they would want to up the theatrical aspects of their music (Opus Eponymous told the story of the birth of the Antichrist, and Infestissumam picks things up from there.) Tracks like first single "Secular Haze" and "Jigolo Har Meggido" have the same bounce and catchiness that characterized their earlier work, with heavier use of synths that create an undeniably fun and eerie atmosphere. However, tracks like the almost unnecessary introductory title track, and the overlong "Ghuleh/Zombie Queen" get bogged down in trying to create ambience, and don't leave much room for actual songwriting.

Several tracks sidestep this problem, and get by just on typical over the top satanic Ghost charm. "Year Zero" sounds a bit like what might happen if someone mashed up the soundtrack from The Omen with the soundtrack from Rocky. It's so ridiculous that it's impossible to not be swept up in the fun. The aforementioned "Jigolo Har Meggido" has a dancey rhythm that recalls Opus Eponymous numbers such as "Ritual" and "Elizabeth." It might not be as immediate as those earlier gems, but the replay value is just as high.

On the technical side of things, Infestissumam is an absolutely stellar sounding record, thanks to longtime Foo Fighters producer Nick Raskulinecz. He's managed to make every instrument stand out, even when buried under a sea of demonic choirs and assorted spooky sound effects. He's also pulled great performances from each member. Pap Emeritus in particular, sounds phenomenal. His vocals, both in sound and in spirit, recall Mercyful Fate leader King Diamond in his mid-range, which is to say, King Diamond when he's not doing falsetto or growling. It's a perfect match for the band's Blue Oyster Cult-influenced satanic doom metal-blues-pop. All the elements that make Ghost who they are in place on Infestissumam; they're just surrounded by the sound of the band trying new things, some of which work better than others.

Infestissumam sold nearly 15,000 copies in its first week of release to end up at number 28 on the Billboard Hot 100. Whether that was worth $750,000 of major label money is somebody else's problem. Musically however, Infestissumam is a good album, if not as staggeringly great as its predecessor. It probably won't meet every fan's expectations, but to be fair, expectations for the first $750,000 Swedish satanic metal album were unrealistically high. The theatrical aspects of the band are a big part of the fun, but they are better confined to the band's stage show and presentation, and the simplicity of their earlier work is a big part of what made it so great. Hopefully they can strike a better balance in the future, but for the time being there is plenty to enjoy about Infestissumam.