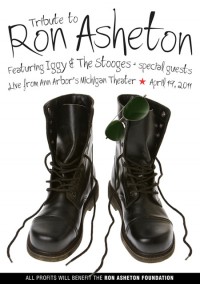 Iggy and The Stooges

The show opens with Henry Rollins giving a quick introduction. Scott Asheton gives a quick tribute to his brother. Rollins returns and pays tribute to the band and then the band suddenly snap into "Raw Power" with Rollins on vocals. Rollins fires up the crowd with a raw and energetic performance. The band is at 10 but then, Iggy literally bounces on stage and it goes up to a twenty. Iggy Pop whips himself around like a man one fourth his age, crawling on the ground, jumping up and down, and of course, jumping into the audience. The band, consisting of Scott Asheton, Steve MacKay, Mike Watt and Radio Birdman's Deniz Tek, blast out fierce, but soulful renditions of most cuts off the first three Stooges albums.

Surprinsgly, the show opens up with a handful of songs off Raw Power were Ron Asheton was placed in the bass position instead of guitar. However, it's a daring, but wise choice because although the Raw Power songs ire up the crowd, when the band breaks into the riff behemoths off Fun House and The Stooges the songs are unfathomably heavy. Despite the huge loss of Ron Asheton, the band still rip without him, perhaps fired up by Asheton's memory. Likewise, Iggy is on fire. He's a maniac, letting his emotions take control, shouting out at random spots, but is also such a veteran that he knows how to deliver lines with maximum impact.

Perhaps because the tribute was produced some time after Asheton's death, the proceedings are a joyous celebration of Asheton's memory. Iggy speaks sparingly, letting Asheton's licks represent the man instad of long-winded speeches. Notably on "Dirt," Iggy accentuates the lyrics "I'm burnin', but I'm grieving' inside. The one moment Iggy does stop to lament Ron Asheton is near the end, where he talks briefly about how Asheton was the first person to get behind the Stooges. He then plays a new, haunting tribute to Ron Asheton along with Tek that was composed by Pop and James Williamson simply titled "Ron's Song." The song is simple and foreboding, pondering the eventual destruction of all flesh. Lyrically and tonally, this is Johnny Cash-level stuff.

In order to make the show special, The Stooges add an entire orchestra to a few songs. But, instead of getting prim and proper, the orchestra acts like a massive blues band, supporting the already massive riffs with horns and thick orchestral sound. Also, Jim Jarmusch shows up for a few songs to pay his respects.

The DVD is supplemental with a few great special features. Henry Rollins and Jim Jarmusch talk at length about what the Stooges and Ron Asheton meant. Also, the entire opening act, The Space Age Toasters, who were named by Ron Asheton is included.

Simply put, this is a fantastic performance. The only way this could have been better is if Ron Asheton was actually alive and was there playing with the band.


Notes:
-All proceeds of this DVD go to the Ron Asheton Foundation
-How about a CD version of this bad boy so I can blast this in my car?