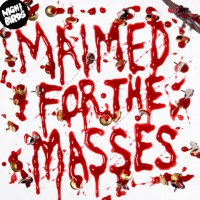 In a perfect world, the above two words would be enough to constitute a review of this release, but the sacred oath signed as a Punknews reviewer requires us to write a minimum of 250 words and I doubt I could get away with repeating those words 125 times, so off I go with another 179 words to get this through the stringent regulations imposed.

This four track 7-inch is a precursor for Night Birds' new album due out on Grave Mistake Records later this year, and basically it kicks ass in a way that only Night Birds do. That is to say, this is cracking snotty punk laced with a surf guitar that adds an extra dimension to the music. The lead track (and the only one off the new album) is a rip-snorting three minutes and sixteen seconds of joy, as this ode to wrestler Mick Foley races along with Brian Gorsegner giving an excellent vocal performance on this and the other two vocal tracks.

The flipside contains three non-album tracks and none of them are stinkers, so if these haven't made it on the forthcoming album one can only surmise that the long player is going to be rather excellent. My favourite of these b-side tracks is the instrumental "Boat Trash" (I don't think a couple of shouts of "Boat Trash!" stopping this from being referred to as such) which has a classic surf sound linked to a punk rock delivery.

Iggy and The Stooges: Tribute to Ron Asheton [DVD]