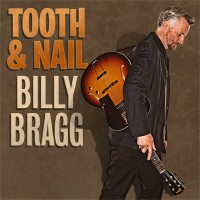 Let's face it. Punks get older, and with that they are less angry. Billy Bragg pretty much proves that, not to say that he isn't active in politics (he's still very politically active). Music wise, however, it's a different story. Over the course of the last decade, there's been a transformation in Bragg's sound. It's become more and more intimate. His last solo effort, 2008's Mr. Love & Justice, was basically where it really came into fruition.

On his latest album Tooth & Nail, Bragg teams up with producer Joe Henry (known for working with Loudon Wainwright III, Allen Toussaint, Hugh Laurie, Elvis Costello and many other big names). The album was recorded in five days without any overdubs. It's very much filled with a lot session players, slide guitars, piano.... it at times feels a lot like Wilco, which is no surprise considering he did three albums worth of material with them. With all that, the album really sounds great. Bragg's voice is just as strong as ever.

Lyrically, it's more focused on the human heart aspect than politics. You do, however, get the Woody Guthrie song thrown in there; the song is "I Ain't Got No Home" and Bragg remakes Guthrie's song into a heart wrenching piece of music. The entire album is laid back, cozy, and beautiful sounding. The one flaw, and it's probably due to the style being used musically with this album, is the political song "No One Knows Nothing Anymore." Instead of being somewhat angry, it's a little too laid back. Bragg gains back the edge though in another political track, "There Will Be A Reckoning."

Tooth & Nail all around is great. It's very beautiful sounding. It's also the very logical sounding kind of album you'd expect an old punk like Billy Bragg to be doing now.

Streetlight Manifesto: The Hands That Thieve