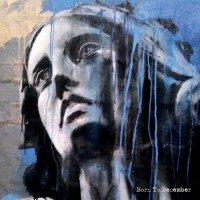 Morning Glory's 2012 LP Poets Were My Heroes was surprising for a few reasons. Namely, records with long gestation periods are very rarely good and usually wind up being decadent, bloated and overblown. But while Poets, in the works on and off for almost a decade, was ambitious, it was also really, really good.

The album's endcap, "Born to December" which is now being released as a single and probably as an endcap to the album's promotional cycle, summed up why the album was so successful. It opens with a live orchestra. Such a choice might make an album seem self-important, but with the way bandleader Ezra Kire directed the music, the organic instrumentation made the music that much more heart wrenching in this age of computer music. "Born to December" deals with Kire describing his early childhood troubles and connecting it to his heroin problems.

It's a brutally honest self-portrait that really lets listeners see the many levels under the artist who was too often (and unfairly) dismissed as being a novelty crack-rocksteady rocker. Kire's depiction is skillful because he doesn't seem to want to paint himself in any sort of light, but rather, describes a scene, offers an honest delivery, and lets the listener take the art as he or she will. Being that making art itself can be considered a self-important act, it's one heck of a feat.

The B-sides, which are exclusive to the seven-inch, extend the album's winning stretch. Being that the album was so massive, it's good that these tunes were left off as they would have made the album too big. But as their own unit, they work wonderfully. "Jesus Christ Boogie" feels more inline with older Morning Glory, and is more political and blasphemous than more recent tunes, as Kire turns the crucifixion into a dance craze with dance moves inspired by Pilate himself. It's a clever concept that surprisingly has not been done before. Even moreso, the song seems to not be an attack on religion, but an attack on self-martyrdom in all its forms and uses religion merely as a backdrop.

"Sara Says" is one of the hardest rockers released by the band and like its predecessor, feels a little bit more like older Morning Glory. The band tear though a high speed, driving rocker that could have been on Kire's INDK album. Meanwhile, Kire issues lyrics that are somewhat more ambiguous than other releases. Cleverly, he merges pop culture icons Bette Midler, Marv Albert and Walt Whitman with concepts of punk rock, and then asserts a dedication to anarchism, though it's unclear if he's stating his own agenda, talking about another person, or commenting on how punk itself seems to have grown a set of rules. One of the things that makes Morning Glory worth of repeat listens is that not everything is spelled out. Maybe that's the point of this song.

Poets Were My Heroes and its attending single had an incredibly long gestation period but was worth it. Though, let's hope the band strike while the iron's hot and keeps their winnings streak rolling sooner than later.

Nightmares for a Week: Civilian War