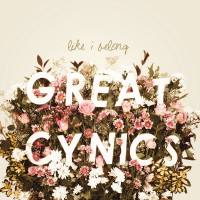 Great Cynics' sophomore full-length Like I Belong is a love letter to being young. This record embraces long, summer nights and the shenanigans that follow, in nearly the same thematic vein as the Smith Street Band's jaunts being written a hemisphere away â walking endlessly around cities, sitting in bedrooms, lying awake between the sheets. They capture the suspended state of young adulthood from the get-go - "We're old enough to know better than this / and young enough to know it's not worth it to care." Nonetheless, "Ways Down" and "Kingsland Roaches" call against slipping into the tempting idleness of your twenties.

Musically, no matter how simple the idea, Giles Bidder knows how to write a vicious earworm. "Letting Go," "Back to Hackney" and especially the swinging, lovey-dovey chorus of "One Like You" quickly lodge in the frontal lobe. Whether this is a gift or curse is yet to be decided, but in the very least, this makes Great Cynics memorable without any pretentious shtick. Bassist Iona Cairns takes the lead on "Waster," which acts like a palate cleanser to the inner ear, and her harmonies throughout the record give a welcome, new energy to the songs. Not to leave him out, true to form, Bob Barrett's fills and accents can create the most delightful moments - and are so much fun in those two bars around the 50 second mark of "In My Head."

Well, if the addition of Cairns' vocals is enough to qualify as growth and development, then Great Cynics have. If slightly shifting the driving rhythm of Bidder's guitar from "one (rest) and three and four" to "one and two (rest) and four," then they're breaking new ground. From the first decibel, this is unquestionably Great Cynics. Really, that is the most frustrating thing about In Your Head â this lack of further experimentation. From the tempos to the themes, this album comes off as middle of the road, which is why the little nuances in "Find the Humour" â like the heightened intensity of the vocals, not to mention the unexpected coda in the last 45 seconds or so – are so frustrating.

At the same time, a few self-aware lyrics lead me to believe that it is intentional â the self-referential "to talk about nothing at all" and "we're younger than everyone else / and we can barely play." They're sticking to the old adage â if it ain't broke, don't fix it. And why shouldn't they? The songs are catchy, straightforward and relatable. I truly believe some big things are in store for these cats, but as a fan that has already heard the tired tunes, I'll be happy enough to watch them blossom from afar instead of the front row.