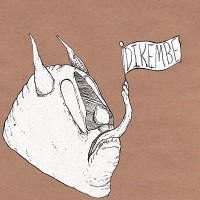 The Chicago Bowls EP is precisely why Dikembe initially garnered the hype and buzz on the Gainesville circuit, spewing their indie-punk/emo sound around. Their full-length that followed it, Broad Shoulders, stood out as well and as its predecessor, Bowls is a testament to the term 'Build it and they will come.' It's one of those starting points for a highly promising band that you know has that something special, and more than worthy of a remaster and reissue – this time, for the first time on vinyl.

"Scottie Spliffen" and "Luc Bongley" are fucked-up titles but charismatic anthems. The organic flow with these four tracks, and the rip-roaring guitars throughout are exactly the fundamentals needed by Steven Gray to lay his vocal foundation.

The elements that made Broad Shoulders so impressive are all here, sort of a precursor for what was inevitably to come. "Michael Jordank" illustrates that Dikembe may not the most infectious, adored or revelatory band doing this particular sound, but the overall energy, inventive breakdowns and sublime structures are all undeniable.

"Tony Kukush" is probably the best of the record and Dikembe show again that they're nothing mystical or groundbreaking, but possess the ability to intersperse snippets of bravado into the musical simplicity. 'I couldn't say sorry / Not even if I wanted to' proves a fitting end to one of their most elegant tracks.

Notes: -May 2013's "Keys to the Jeep," on a side note, magnified just how well-prepared this quartet are to build on their small-scale success. They'd probably say, as they've done in the past, they'll gladly accept any modicum of plaudits slung their way, but if it's one band that deserves much more recognition, it's Dikembe.