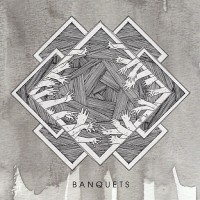 New Jersey's Banquets turned a lot of heads with their debut full-length, 2011's Top Button, Bottom Shelf. Now the band have returned with their self-titled sophomore album, and once again, they deliver a collection of strong, catchy, tuneful anthems.

Were it not for the obvious heart and emotion in the songs, the band might seem almost calculating in how perfectly crafted their songs are for fist pumping sing alongs in sweaty clubs. From the first notes of opener "Little Shallow," to album highlights like "Call it a Comeback" and "March 19th," Banquets deliver hook after hook after hook. The band haven't changed dramatically in the years since Top Button, Bottom Shelf but they've refined their attack, resulting in perhaps a more consistent, focused set of songs.

Singer Travis Omilian is in top form here; his distinctive vocals sound the better than ever and the production is clean and crisp, allowing every line to be heard, understood, absorbed, and shouted back at the next show. The band have stepped up the game as well: the drums sound huge and powerful, but not to the detriment of the rest of the fellas, with furious riffs driving along the songs.

One surprise for Banquets this time out comes toward the end of the album, in the form of the midtempo "Burns in the Breeze." The song hints that the band could do a whole lot more than the catchy, fast punk rock they do so well. Not that they necessarily need to; the steady improvement on the solid sound the band have developed is excellent, and could propel these gents far.

All in all, the self-titled album from Banquets takes everything that made Top Button, Bottom Shelf great and kicks it up. Bigger hooks, bigger sing alongs, the works. Banquets will undoubtedly make more than a few year-end lists in 2013.