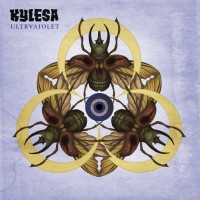 One of the biggest forward leaps from album to album in heavy metal came with Metallica's jump from 1983's Kill 'Em All to 1984's Ride the Lightning. "Fight Fire with Fire" was much faster and heavier than anything on Kill 'Em All (and arguably remains the heaviest song in their catalog), while "Fade to Black" was the world's first thrash metal power ballad, and expanded the horizons of their subgenre further than bands like Slayer or Exodus would have dared. By becoming simultaneously harder and softer, they became a more well-rounded group altogether. With Ultraviolet, Savannah, Ga.'s Kylesa have taken a similar approach in following up their 2010 masterpiece Spiral Shadow. They've continued their experimental streak and gotten even weirder and more psychedelic than they did on that record, while at the same time, brought back some of the aggression from their early work to make an all-around more diverse album.

Historically speaking, Kylesa's album titles perfectly describe the music contained therein. Static Tensions was an abrasive blast of sludge metal, whereas Spiral Shadow was a drug-like, ever twisting labyrinth. Ultraviolet finds the group exploring brighter textures than ever before. Opener "Exhale" is vintage Kylesa, showcasing thunderous Sabbath-like riffage accented by Phillip Cope's abrasive yelping. Things get weirder from there, however. Immediately following "Exhale" we are treated to "Unspoken," which directly lifts the riff from Arcade Fire's "Wake Up" and uses it for evil. It is here that we get our first glimpse of how far Laura Pleasants' vocals have come. Her voice is the biggest factor in Kylesa's constantly expanding musical scope, and she takes a much more dominant role vocally in Ultraviolet than ever before.

The group really stretch their musical legs on Ultraviolet, even trying their hand at some Clutch-like southern boogie on "Grounded." It's worth noting that Kylesa are actually from the south, whereas Clutch are not, so they are perhaps more entitled to this stylistic deviation. Album closer "Drifitng" flirts with both post-rock and electronica, and manages to feel like an epic in a mere five minutes. As with Spiral Shadow's "Don't Look Back", Ultraviolet contains a standalone alt-rock track. While that song was heavily indebted to loud-quiet-loud pioneers the Pixies, "Quicksand" is a dead-ringer for Siamese Dream-era Smashing Pumpkins, droning shoegaze guitars, soaring vocals and all.

More than anything, Kylesa are a band. Every member is essential and they work together as a well-oiled machine. The duel drums of Carl McGinley and Eric Hernandez, combined with the thudding bass of Chase Rudeseal, make for one of most interesting rhythm sections in modern heavy music. Cope and Pleasants' vocals complement each other perfectly, and can seemingly go in any direction at any moment. All of this adds up to another winning album in a near-flawless discography.