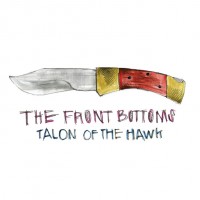 Talon of the Hawk, The Front's Bottoms' follow-up to their self-titled, strikes one of two emotions out of those in my social network. In the most basic camps, I've encountered those that are "into it" ï¿½?? the youthfulness resonates in a way that's both comical and forceful, and those that "don't not like it" ï¿½?? not turned off, but missing the simpler witticisms of the first record. I get both opinions, but I fall more along the former. Give it a few listens. Let yourself find your new favorite lyrics. The New Jersey duo manage to put out some songs fuller, tighter and more realized than anything they have done before.

With a few additional members to make sure everything is tight, Talon of the Hawk will translate into fun, involved live shows. I could be wrong, but who's going to sing the echoes and "heys"? Everyone around you. Not to mention, they'll be dancing. The tempo holds a groove and can be halved and doubled at will to keep things interesting, thanks to a confident and "insanely good" drummer.

Nevertheless, between a name like theirs and some herb-fueled anthems, they've put themselves in a corner, but maybe it's more like a niche that they'll grow upward and into. There's no doubting the talent and experience. One of the biggest disservices one can do to this band is to assume that with the Nintendo-esque sprinklings and slew of cutesy opening lines, that this album cannot be dense. A number of the songs on Talon are very personal and show an uncommon, brutally honest vulnerability. For one, "Lone Star" would have made an excellent closer for being so open and heavy, but it's in true Front Bottoms form to not dwell too long, as they pick up the mood quickly with "Back Flip" and focus instead on regrettable tattoos and accurately describing Floridian vehicles.

As Skyler White would say, the devil is in the details. In "Au Revoir," it's the cheeky, American pronunciation and the accordion that comes in on cue with "she says that it's French" and the full-band kick-in on the words "rock and roll." In "Twin Size Mattress," they have the same purposeful instrumentation at the mention of the tambourine. To add, as the first publicly released song from the record, this single is such an emotional high point, it only made my anticipation to hear the rest grow over the last few weeks. Someone out there made a good decision.

The double entendre beneath the chorus in "I Swear to God, the Devil Made Me Do It" proves Brian Sella's lyrics are still able to be cunning this time around. He also finds new ways to express the comings and goings of young relationships, done in a style that they've claimed, "I want to confess it in a whisper that's just loud enough to make out" from "Santa Monica," and "Keep me in love / Keep me believing that it's with you" from "Everything I Own." Yet, even with these examples, some choruses far from highlight lyrical genius, and unfortunately they are repeated ad nauseum, taking the listener out of the song altogetherï¿½?ï¿½ even if it builds to something musically worthwhile. If you let yourself be a little forgiving in those places, then Talon of the Hawk will be a go-to crowd pleaser (in the best sense of the word) for months to come.