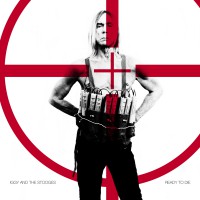 Iggy and The Stooges

With six years to reflect, the fact of the matter is 2007's Stooges comeback album The Weirdness really wasn't that bad. While it certainly did not rise to the phenomenal heights of The Stooges, Fun House or Raw Power, saying that it fell short of those albums is basically saying that The Weirdness was not one of the absolute greatest albums ever made. Well, duh. If anything, The Weirdness was an exercise in expectations. People expected the fourth best album ever and instead, got a pretty good proto-punk rocker, so the album got trashed. (Interestingly, when people expected The Weirdness to be so great, they conveniently forgot that Iggy has released a lot of mediocre albums since Lust for Life.). Still, with the Stooges' legacy somewhat tarnished, and with people's expectations set so low, Iggy and The Stooges' follow-up Ready to Die succeeds both because no one really expected much and because, quite simply, it's a tighter album.

With James Williamson back on guitar for the first time since Raw Power, the band rip through ten compact songs. For the most part, the songs are based in three-chord, driving riffs. Williamson steers the album by slicing away with his blues-meets-glam rock guitar lines, while the rhythm section of Scott Asheton and Mike Watt provide a stomping, thick backdrop. Founding Stooge Ron Asheton passed away after The Weirdness and just like the transition between Fun House and Raw Power, the difference in guitar is palpable. Whereas Asheton attacked with a thick, dark rumble, Williamson jumps out with a thin, rushing spark. While the style can be and frequently is great, here the energy is mostly lost in a fairly mid-tempo delivery.

Iggy turns in a respectable, but not fiery performance. For the most part, he relies on a sort of sing-talking as opposed to the blues howl heard back during the band's original run. Instead of the death shriek that opens "T.V. Eye," Iggy relies on his lower registered, flickering tone. Similarly, a great deal of the lyrics seem to have been written almost as a chore instead of exploding out of his body. Modern critics have sometimes accused Iggy of never having been a great lyricist in the first place, but really, that's just wrong. Lyrics are a combination of the written word and delivery. When Iggy screamed "I feel alright!" in his anguished wail, it said more than even the most profound Propaghandi essay. But here, for the most part, his delivery lacks fire and is overbearingly direct. On "DDs" when he says "I'm on my knees for those double Ds", he doesn't sound like a coyote on a man's flesh, he sounds like a pervert.

Still, there are times when Iggy outdoes almost all of his solo stuff and challenges the band's original run. On "Unfriendly World" and the Asheton tribute "The Departed" Iggy opts for a rusty, restrained voice that contemplates mortality and the cruelty of the world. It feels like the most honest parts on the entire record and also, between Iggy's melancholy delivery and his restrained voice, is as profound as the berserker yelps on the group's earlier releases. Really, this is the kind of thing that made Johnny Cash so famous in his final decade.

Stacking Ready to Die against the band's legacy is a match destined for failure. But if one doesn't expect the last great Stooges album and sets aside the hype, Ready to Die is actually a pretty good, satisfying proto-punk rock album. And then, every so often, it rises to amazing heights.