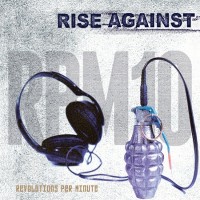 In order to appreciate the 10th anniversary reissue of Rise Against's Revolutions Per Minute, it's important to regain context about the era from which it came–and the new era in which it ushered. Melodic hardcore as we've come to know it didn't exist back then, save a few outliers who'd gain ground after Rise Against popularized the genre. The closest a band had come prior was Strike Anywhere, whose 2001 LP Change is a Sound didn't necessarily break them out despite its fan-favorite status; that would happen fully with their follow-up Exit English, released in Sept. 2003–five months after RPM hit the shelves.

In the ensuing decade, literally thousands of bands residing somewhere within the melodic hardcore spectrum came along, and, like us, were undoubtedly heavily influenced by RPM. Even if most fans would agree that Rise Against have somewhat lost their way as they've become more and more popular, the impact of this record is still being felt a decade later.

Not only did Revolutions Per Minute influence thousands of bands musically, it did so lyrically and socially as well. In 2003, the United States was in the initial throes of the "War on Terror," a conflict in which the Bush/Cheney administration sought to protect America's interests at home and abroad through questionable–and in the minds of many, outright illegal–means and tactics. The war in Iraq, which began that same year, became a lightning rod for debate in America and across the world, especially as the death tolls and money spent mounted. Consequently, it gave punks a cause and authority figures against which to rebel, proving once again that tragedy, suffering and injustices–as awful as they can be–have always tended to yield the best, most arresting art. It's interesting to think about how our scene might be different today had none of these things happened; the beat would certainly go on, but would there have been as much aggression or as much urgency?

RPM holds up surprisingly well. Maybe it's the enduring quality of the songs; maybe it's pure nostalgia for a less jaded time. It could be a combination of both. What's readily apparent as the initial notes of "Black Masks & Gasoline" rip through the speakers, though, is that there hasn't been punk rock this melodic, this aggressive and this catchy since; this was as high as the melodic hardcore genre ever got or will get. The catharsis of "Heaven Knows," "Halfway There" and "Blood Red, White & Blue" is just as palpable and ear-splitting as it was ten years ago. The fiery hardcore of "Dead Ringer" and "To The Core" remains as vital-sounding as it did in 2003–and these two songs were throwbacks then. Tracks like "Voices Off Camera" and "Broken English," we now know, hinted as what was to come in terms of Rise Against's ear for catchiness and lean for accessibility through the noise. The remaster for RPM10 doesn't change too much, but it does give the record a fuller, thicker sound, making it punch just a little harder than it did before.

The demos packaged with this reissue are a neat, if non-essential addition. They do sound awfully clean for rough takes, but save a few lyrical differences are largely unchanged from what would become the final album. For megafans of Rise Against and the genre as a whole, it's still a treat to hear these massively important songs in their earliest forms. Curiously absent from the collection of demos are "Dead Ringer" and "To The Core," the two hardcore-tinged anthems mentioned above; it's possible that they were written in-studio or that that those recordings are lost forever.

RPM remains one of the most important records in recent punk history, and RPM10 is a fitting tribute to Rise Against's massive influence, underrated innovation and talent. It's a snapshot of a band coming into their own as songwriters and musicians that will live on forever in the hearts and minds of those who were there when it happened. It's a stone cold classic.

Iggy and The Stooges: Ready to Die