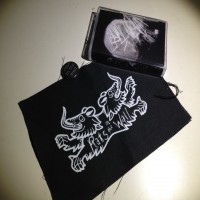 Rats in the Wall

After a number of years and several bands that collapsed before releasing any material, Brad Logan of F-Minus and Leftover Crack finally releases some new music. Rats in the Wall, which admittedly aren't just a Brad Logan affair, reference F-Minus while going in a more classic and darker direction.

As with F-Minus, Rats in the Wall have dual male/female vocalists. Logan's bark is as hash as ever, but wisely, instead of screaming pure white noise, he keeps some humanity in his voice which gives the music a sense of dynamics. Co-vocalist "Eva" exists somewhere between the siren call of Penelope Houston and the grinding screech of Nausea's Amy Miret. Like Logan's approach, it elevates the band above the run-of-the-mill-always-screaming hardcore contemporaries.

Likewise, the music shifts from an F-Minus all-out hardcore attack on "Take Two" to a twisting, darker, Sabbath-style riffage on "No Way Out." The shift between the two styles is done in such a way so that the changes feel natural, giving the music a wider variety of texture.

Lyrically, the band take reference from Nausea–one of Logan's influences–and focuses on women's rights, the "in crowd," and the annihilation of the human race. Songs are presented as broad abstractions, so that the lyrics work in any number of situations.

Between the band's unique guitar tone, shifts in sound, and excellent vocal intertwines, Rats in the Wall may turn out to be the best Logan-helmed project yet. I'm excited.

The Murder Junkies: A Killing Tradition