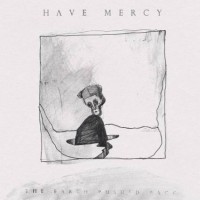 On The Earth Pushed Back, the J. Robbins-produced debut from Baltimore's Have Mercy, the band spin a couple new yarns on a fairly familiar sound, successfully creating a dynamic between heartfelt emo and austere post-hardcore that's never too much of one or the other. Not an easy feat.

Brian Swindle's vocals are the perfect balance of gritty and melodic, and he shines almost immediately on opener "Level Head," rising and falling seamlessly with the music around him. "Ancient West" features the rhythm section more prominently, with perpetually crashing cymbals and a louder-than-usual, distorted bass. Like much of the record, it sort of sounds like what would happen if Jimmy Eat World and Small Brown Bike formed a megaband.

Have Mercy succeed at ballads, too: "Hell" keeps a relatively quiet profile before Swindle elevates his vocals into something far more cathartic; "Weak at the Knees" is an anthemic love song with a huge chorus; "Let's Talk About Your Hair" is a standout track through its interesting percussion and subtle tempo changes; some female backup vocals, along with a piano and some strings in "Living Dead" add a nice touch to an already solid song.

The Earth Pushed Back ends on a few high notes, figuratively and literally. There's some subtly intricate guitar interplay in "The Gates" that showcases just a little bit of what sets Have Mercy apart from some of their contemporaries while maintaining the established catchiness. Swindle shines on "Cigarettes and Old Perfume," his voice reaching heights mostly unseen on the rest of the album, including a distantancing production effect that's, well, pretty effective.

Closer "When I Sleep" is relatively concise, adding a nice layer of acoustic guitars for depth and filling the empty spaces with a lot of cymbal hits and soloing. It's probably the most cloying song on the record, but not overly so; the same could be said for much of The Earth Pushed Back, which should please post-hardcore and emo fans alike.